When many people picture Venice in their mind, they see not only the extensive network of canals and gondolas, but also the plentiful majestic landmarks lining the waterways. The Palazzo Mocenigo standing right next to the Grand Canal is just one example, with the Palazzo Ducale (Doge's Palace) also being very much of note.

Spanning the Grand Canal, the Rialto Bridge (Ponte di Rialto) is another of Venice's most iconic sights, while around the bridge there are some very notable buildings, such as the Fondaco dei Tedeschi, which was once a German trading house and is now the central post office. The oldest church in the city is also nearby, the Chiesa di San Giacomo di Rialto, which was founded almost 1,600 years ago.

Tourists in Venice tend to be drawn to St. Mark's Square (the Piazza San Marco), which is presided over by the Patriarchal Cathedral Basilica of Saint Mark (Basilica San Marco). This giant Roman Catholic cathedral boasts elaborate Byzantine architecture, religious art works and golden mosaics, being crowned by a series of decorated domes and spires. 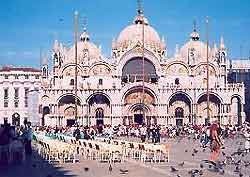 Address: San Marco Square, Venice, Italy
Tel: +39 (0)41 522 5697
With over two square kilometres of beautiful mosaics, the Basilica of San Marco is one of the most famous sights associated with Venice. St. Mark's church is home to many wonderful treasures, such as the 'Pala d'Oro' - a masterpiece in gold, many precious glasses, amphoras, cups, carvings and statues. This vast church is truly spectacular and was constructed on a Greek cross plan, being topped with five huge domes.

Originally built as a shrine to St. Mark in the 9th century, this church was destroyed by fire. The second building was demolished in the 11th century to make way for a more impressive building and it has been remodelled over the years, becoming the cathedral of Venice, where many state ceremonies take place. A lift is available, which takes visitors to the top, where there are fabulous panoramic views over the rooftops and lagoon. This is without doubt the city's number one sight, attracting enormous crowds, and so it is advisable to get here early.
Open hours: Monday to Friday - 10:00 to 17:00, Saturday and Sunday - 13:00 to 17:00
Admission: charge 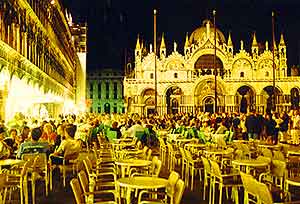 Napoleon once remarked that St. Mark's Square was the 'finest drawing room in Europe'. This square has been a popular tourist attraction for centuries and is also home to many hundreds of pigeons. The piazza is the point around which Venetian life revolves and there is always an exciting atmosphere in this busy square, with many cafés often playing live music. Without doubt one of the finest piazzas in the whole world, St. Mark's Square is surrounded on three sides by the arcades of public buildings - the Procuratie Nuove (south), the Procuratie Vecchie (north) and the Ala Napoleonica (west).

The stunning rounded domes of the outstanding Basilica San Marco add to the overall character. Originally much smaller, with fruit trees and a canal running down the centre, the square was covered with paving slabs in 1267 and the canal was subsequently filled in. The 15th-century Torre dell'Orologio clock tower rises high above the entrance to the Mercerie and its bell is struck every hour. St. Mark's Square is actually one of the lowest areas in the city and consequently it can become quickly covered in water at high tide (acqua alta) from October to March, which is quite an unusual and memorable sight. There are also two columns containing the emblems of the city's patron saints - the figure of St. Theodore and of course, the winged lion of St. Mark himself.

Address: San Marco Square, Venice, Italy
Tel: +39 (0)41 522 4064
After collapsing in 1902, the much-loved Bell Tower of San Marco was rebuilt and restored. When the hours change, the bells sound. Unlike the clock tower, it is possible to climb the bell tower and admire the square from high up.
Open hours: daily - 09:30 to 18:30
Admission: charge 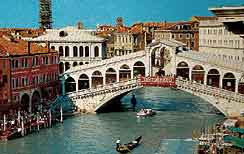 Address: Rialto, over the Grand Canal, Venice, Italy
In the late 1500s, Venice held a competition to design a stone bridge that would replace earlier wooden versions across the Grand Canal. This created much excitement and some of the best architects of the time submitted entries, including the likes of Michelangelo, Palladio and Sansovino. The winning bridge was one that was designed by the appropriately named Antonio da Ponte (Anthony of the Bridge) and concentrated more on the actual structure, rather than on fancy detail and elaborate decoration.

The design also kept costs to a minimum, which was important at the time, as the city's finances were low after the opening of oceanic trade routes and also wars against the Turks. It soon became the most famous of the city's bridges and there are many shops close by, selling a wide range of jewellery, linens and Murano glass. Rialto has always been the commercial heart of Venice and this is reflected in the surrounding street names. The area is famous for its popular fruit and vegetable market.

Address: Calle della Ca' d'Oro, Cannaregio, 3933, Venice, Italy
Tel: +39 (0)41 523 8790
This fabulous Venetian Gothic palace was built in the 15th century and is full of many detailed sculptures and ornaments that were once covered with gold. Probably the finest example of Gothic architecture in Venice, the facade too was once gilded, hence the name 'Golden House' or 'House of Gold' as it is sometimes called. After extensive restoration, the colours of this beautiful mansion's exterior once again reflect in the Grand Canal. The Ca' d'Oro is now home to the Franchetti Gallery, displaying a fine collection of Venetian Byzantine art, with paintings, sculptures, bronzes, marble busts and Flemish tapestries. Since 1984 it has housed the important Giorgio Franchetti art collection, with masterpieces by famous artists such as Mantegna, Diana and Carpaccio. Also, downstairs there is an attractive well, built by Bartolomeo Da Bon in 1427.

There is an impressive mosaic on the ground floor (a copy of the one in the Basilica of St. Mark) and many fragments of Giorgione and Titian's frescoes are displayed on the second floor, saved from the outside of the Fondaco dei Tedeschi. Whilst walking around this splendid, vast building, there are several opportunities to look out from balconies, allowing visitors to admire the stunning views across the Grand Canal.
Open hours: Tuesday to Sunday - 08:15 to 19:15, Monday - 08:15 to 14:00
Admission: charge, free to under 18s and seniors, combined ticket includes entrance to Museo Orientale and Gallerie dell'Accademia

Address: Fondamenta Pedrocco, Dorsoduro, 3136, Venice, Italy
Tel: +39 (0)41 241 0100
Facing onto the Grand Canal, the Ca' Rezzonico is a simply enormous 17th-century baroque mansion, complete with probably the most magnificent ballroom in the whole city. Over the years it has hosted many wonderful costume balls, including one in the 1960s to honour Richard Burton and Elizabeth Taylor. Construction commenced in the 1660s by architect Baldassare Longhena and the building was finally completed in its entirety in the 1750s by Giorgio Massari.

The mansion has been home to several notables during its life, including the famous English poet Robert Browning, who actually died here. Today, the Ca' Rezzonico now houses the Museo del Settecento Veneziano (Museum of 18th-Century Venice), with a grand collection of 18th-century furniture and extensive art exhibits. Highlights include a wonderful series of ceiling frescoes by Tiepolo, a grand staircase and also some splendid views across the Grand Canal. The museum has successfully recreated the feeling of a Venetian palace and as a result, it is easy to imagine the building's rich history and interesting past.
Open hours: April to October, Tuesday to Sunday - 10:00 to 18:00
November to March, Tuesday to Sunday - 10:00 to 17:00
Admission: charge

Address: Salizzada San Stae, 1992 San Stae, Venice, Italy
Tel: +39 (0)41 721 798
This beautiful palace is sited on the banks of the Grand Canal and boasts an impressive pedigree, since it was once the home of one of the city's most wealthy and influential families. Today, the Palazzo Mocenigo is called home by a modest museum, with a collection of clothing, antiquities and period furnishings. There are also various art works, elaborate floors and some eye-catching glass chandeliers originating from Murano. Taking a tour of the house offers a real insight into how wealthy Venetians once lived.
Open hours: April to October, Tuesday to Sunday - 10:00 to 17:00, November to March - 10:00 to 16:00
Admission: charge, combined ticket accepted

The following churches are now part of the Chorus Pass scheme, where one ticket allows a single visit to each of the churches over a one-year period: