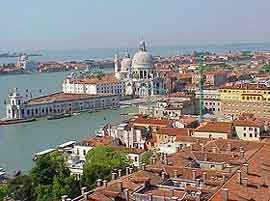 Venice, Italy is one of the world's great cities and the locals are cheerful, friendly and generally very helpful. Good manners are welcome everywhere and expected by most people. Venice is undeniably a major-league cultural and historic city and worth a visit, whatever the time of year.

Most Italian words are pronounced exactly as they are written, syllable by syllable, and there is often an emphasis on the last letter. A knowledge of Latin can be useful, both as the basis for Italian and also for reading the inscriptions on many monuments.


Although Italian is the language of the land, English is generally understood and usually spoken to some degree at most attractions, museums, hotels and restaurants that cater to visitors. In smaller towns and villages nearby, a phrase book is a useful item to carry. Italians pronounce words exactly as they are written and so when speaking English, it may sound a little strange.

Locally spoken Veneziano is an actual language, with a rich history associated to it. It is more than a local dialect and is spoken throughout Venice and restaurant menus are often written in Venetian, Italian and English.

Venetians are very religious and enjoy going to church on a regular basis. There are a large number of churches in the city that welcome visitors and some even hold masses in English.

In many buildings and public transport, rules restrict smoking and this is usually indicated by no-smoking symbols in prominent places. Most pubs and bars welcome customers who wish to relax with a drink and smoke, as a high percentage of Italians are smokers.

Tipping is quite discretionary, with taxi drivers usually being given a small gratuity. Restaurants often include service charges and these are always clearly stated on the menus, although a small tip will still be expected. In Italy, even theatre and cinema usherettes expect a tip for showing you to your seat. Hotel staff, such as luggage handlers, happily accept a small tip. Generally, no other public service workers expect tips. You should always pay tips in cash, as this way you can be sure that the person it is intended for receives it fully.

Tel: +39 (0)41 529 8727
Venice's tourism and tourist information service (APT) has several offices in the city centre that provide a wide range of information about tourist attractions, Venice accommodation and events. The main office is known as the Venice Pavilion and is situated on the waterfront at the west side of the Giardinetti Reali, within a minute of the Piazza. There are several other smaller offices, including one at the airport and these are open between 08:15 to 19:15 Monday to Saturday.

Public toilets in Venice are somewhat uncommon and many of the locals tend to use the amenities in local bars, either by asking politely or by purchasing a drink first, and also at the train stations. Pay toilets are usually well signposted and a few are located in the city centre and can be used for a small nominal charge.

Venice cards entitle you to discounts at some shops, restaurants, cinemas, museums, exhibitions and also for some transport services. There are different types of card that are valid for either a period of days or for a whole year and they are ideal if you are visiting Venice for a week or more and plan to explore. For those aged between 14 to 29, the 'Rolling Venice' youth card provides the most discount opportunities. Details of these cards can be obtained at the tourist offices.

The biggest threat in Venice is by bag-snatchers and pickpockets and thieves operate on foot and by moped. The thieves are very skilled, so be particularly careful with hand baggage. Wear a bag or camera across your body, or even use a concealed money belt. Also, ignore any illegal touts, who offer services such as arranging parking and finding hotels - although generally the city is free of con-men.