Tourism is big business in Venice and the city has many exceptional tourist attractions to show off, often being greatly enhanced by their waterfront locations. Boat trips around the Venetian Lagoon and gondola rides along the canals both come highly recommended in Venice, providing tourists with a relaxing and easy way to see many famous attractions.

When holidaying in Venice, a camera really is an essential part of luggage and allows tourists to properly remember the sheer scale and grandeur of attractions, such as the Basilica di Santa Maria Gloriosa dei Frari, the Scuola Grande di San Rocco and the Basilica di Santa Maria della Salute. Also very much of note is the public square named the Campo dei Santi Giovanni e Paolo, which boasts an impressive equestrian bronze depicting the renowned 15th-century military leader Bartolomeo Colleoni. 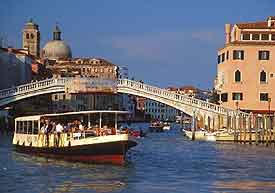 Address: Campo San Luca, San Marco 4179, Venice
Tel: +39 (0)41 240 6736
Daily island tours of Burano, Murano and Torcello are run by the Cooperativa San Marco, from April to November. The tours are approximately 3.5 hours long and depart at 09:30 and also 14:30 from the Giardini Reali, nearby the Piazza San Marco. Tickets can be purchased at the Alilaguna kiosk.

One of the best ways to see the highly pedestrianised city of Venice is by foot, where most of the top attractions are easily within walking distance. By taking one of the many walking tours with licenced tour guides, you can be sure not to miss any important sights on the route, and at the same time, hear many fascinating insights and facts about Venice and its architecture. Rates are fixed and there are many different tours available, including: 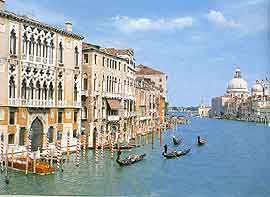 Address: Venice
The Grand Canal in Venice is a wonderful stretch of water and it is often referred to as 'the most beautiful street in the city'. Travelling along the historic canal is a great way to see some of the city's most spectacular and extravagant architecture. A trip at night is a particularly memorable experience, with the city's architecture reflecting in the water.

Address: Campo dei Frari, San Polo, Venice
Tel: +39 (0)41 522 2637
This church is simply enormous and the architecture is a combination of plain brickwork and fine detail. Known to many simply as the 'Frari', the first church was built between 1250 and 1338 and was subsequently replaced by a much larger building in the mid-15th century. The striking interior is vast and contains many pieces of high-quality artwork, including masterpieces by Titian and Giovanni Bellini. There is also a large statue created by Donatello and many other imposing monuments.

Address: Campo San Rocco, San Polo 3058, Venice
Tel: +39 (0)41 523 4864
With large, white marble columns on the facade, this building is quite splendid on the outside, and simply breathtaking on the inside. The interior has been richly decorated by famous artist Tintoretto, who spent over 23 years of his life decorating the school. There are more than 50 paintings by the master and the concentration of work is almost overwhelming. Hand mirrors are available to allow visitors to inspect the ceiling paintings more easily. There is also some interesting carved woodwork, which includes a false book collection.
Open hours: April to October - 09:00 to 17:30
November to March - 10:00 to 16:00

Address: Campo dei San Giovanni e Paolo, Venice
This square is full of many popular Venice attractions and used to be known as the Campo delle Maravege (marvels). It features an imposing sculpture - Monumento di Bartolomeo Colleoni - which stands in the square and was created by Verrocchio. Also nearby is the church of Santi Giovanni e Paolo, which was founded by the Dominicans in 1246. Construction of the present church actually began in 1333 and was finally completed almost 100 years later. It was restored in the 1920s and the large interior is home to many monuments. 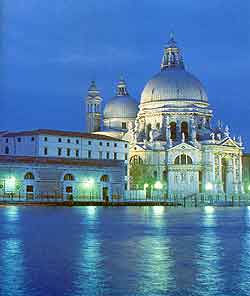 Address: Campo della Salute, Dorduro, Venice
Tel: +39 (0)41 423 7951
This famous Venetian landmark dominates the view of the Grand Canal from the lagoon and the water is reflected on its bright surface. The Ciesa di Santa Maria della Salute is a very individual and beautiful octagonal church, built partly of 'marmorino', a brick covered with marble dust. It was constructed between 1631 to 1681 in thanksgiving after Venice began to recover from the great plague of 1630 to 1631. It was designed by Longhena and has an enormous white dome and very grand baroque- style architecture.

Address: Campo San Sebastiano, Dorsoduro, Venice
Tel: +39 (0)41 528 2487
Built in the 16th century, this parish church was decorated by artist Paolo Veronese, who filled the interior with wonderful frescoes and canvases, which cover much of the ceiling and walls, making it truly individual. Veronese produced many astounding works here throughout his career, and after his death, the church became his resting place. Titian also left his mark here, with his notable 'San Nicolò' painting near the entrance.
Open hours: Monday to Saturday - 10:00 to 17:00, Sunday - 13:00 to 17:00