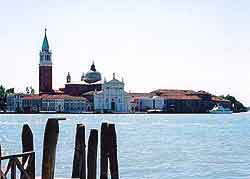 The islands surrounding Venice really do lend themselves to day trips, with many boasting some truly exceptional historic attractions. Giudecca is a particularly pleasant and peaceful spot, with some awesome views of the Venice skyline across the waterfront - bring your camera.

The busy town of Burano is full of streets lined with brightly coloured houses and this is a great place to pick up a quality souvenir, such as traditional lace work. Torcello holds a captivating history and although it is a shadow of its former self, this really is all part of its charm. Many tourists plan an excursion to the island of Murano, coming to see its wealth of glassworks and related attractions. On Cannaregio you will find a rich Jewish heritage, while on Pellestrina, it is the ancient seawalls and beachfront that provide the main character and interest.

The island of Giudecca is a suburb of the city, although it was once an exciting and vibrant place, full of palaces, gardens and wealthy Italians. It was originally named Spinalunga (long spine) after its overall shape. These days Giudecca takes on a much slower pace of life, with the long wide quayside surrounding the city being an ideal place for a walk. 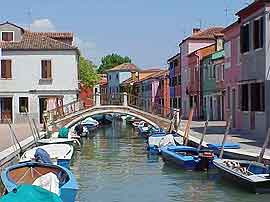 Best known for its fishing and lace industries, Burano is near to Venice and can be easily reached by ferry, which takes about 40 minutes. Highlights of the island include some beautiful parks and the Museo del Merletto di Burano, a lace-making museum which is open daily (except for Tuesday) from 10:00 to 17:00. Original Burano lace is very expensive and these days there is also a wide range of cheaper lace for sale, regularly imported from Asia.

Most people that travel to Burano do so as part of an excursion that also stops at Murano and Torcello. Whilst in Burano, make the time to cross over the wooden bridge into neighbouring Mazzorbo - a much larger island with only a few houses, a couple of restaurants and lots of open green space.

Founded in the 7th century, Torcello was a thriving community and commercial town by the 12th century, with many palaces, churches, shipyards and docks, and at its peak, a population of around 20,000. With the rise of Venice, the island went into decline and today has a small population of just 100 people. It is fascinating to walk around and try to imagine the busy town that used to be here. The truly magnificent Byzantine mosaics in the Chiesa di Santa Maria Assunta - the cathedral of Torcello, date from the 11th century and are a strong reminder of the importance, wealth and history of the island.

This neighbourhood is the most northerly area in the region, stretching in a large arc from one of the oldest quarters of Venice in the east to the more modern railway station in the west. Responsible for introducing the word 'ghetto', Cannaregio has many quiet streets off the main areas. The three major canals were created from marshes in medieval times and these are now criss-crossed by a series of smaller waterways.

With a strong Jewish history, Cannaregio is full of interesting memorabilia and related attractions, particularly at the Museo Ebraico, which contains splendid silver Hanukkah lamps and torahs, Passover plates, and beautifully decorated wedding contracts in Hebrew. There are also five synagogues, three of which have hourly guided tours in both Italian and English.

The island of Murano is probably the best-known and most popular of the islands of Venice and is made up of many smaller islands linked by bridges. Murano is most famous for its glassworks and the local glassmakers have revived many techniques that had almost been forgotten, including the art of enamelled glass. There are many glass shops and factories around the island where you can see how glass is made. The Museo d'Arte Vetrario is a glass museum that is devoted to the art and history of glasswork. It contains one of the largest and most important collections of Venetian glass dating back to Roman times and there are over 4,000 pieces on display. Another of Murano's highlights is the splendid Veneto-Byzantine Basilica di SS Maria e Donato, which has a detailed 12th-century mosaic pavement.

Near to the most southern area of the Lido and separated by the Porto di Malamocco lies Pellestrina, a small peaceful island just 11 km / 7 miles long. There are several small villages spread around the island and these are home to the families of farmers and fishermen. The seaward side of the island is protected by the impressive Murazzi - 18th-century seawalls made of Istrian stone. These walls were a great feat of engineering and once stretched over 20 km / 12.5 miles, protecting the island from the power of the sea until the horrific floods of 1966, when it was badly damaged. The wall has since been partially restored, in the 1970s. At low tide, a walk on the deserted beach provides a refreshing alternative to the busy pavements of Venice. The No. 11 Lido-Chioggia bus and ferry line stops at Pellestrina en route and you can take bicycles at a small extra charge.