Venice, Italy is an extremely popular tourist and business destination and the city is easy to reach by plane, with extremely frequent flights and good connections from all over the world. The city is served by two airports, Marco Polo Airport, which has mainly schedule flights and the smaller Treviso airport, which is situated slightly further from the city and is for cheaper, charter flights. In general, flying into Italy tends to be a relatively hassle-free experience.

Cars can be readily hired at the airport and the A4 is the quickest way to reach Venice from east or west. This main road also connects Turin with Trieste and runs through Milan and Mestre. There are several main car parks in Venice, all of which can prove expensive.

Regular ATVO buses travel to and from the airport from Piazzale Roma via Mestre train station. This relatively inexpensive trip lasts about 30 minutes. There is also a reliable ACTV bus service that also serves the airport from Piazzale Roma, which makes more stops and takes slightly longer to reach the city centre. It departs every 30 minutes and runs from 04:40 to 00:40. 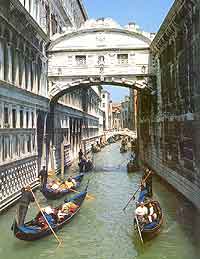 Travelling by boat is probably the best way to reach the city centre from the airport. The Alilaguna hydrofoil runs a regular scenic service until midnight, stopping of at the Lido en route. The direct journey takes around an hour to reach the landing near to the Piazza San Marco.

Sleek, modern water taxis (motoscafo) are a fast way to travel into Venice, but also an expensive way. Fares should always be agreed on before departing and it is advisable to avoid private boats.

A taxi cab ride from the airport into the centre of Venice is a relatively quick way to travel into the city centre, taking around an hour. There are usually plenty of authorised, yellow taxis lined up by the main arrivals gateway of each terminal and the fares are quite reasonable.

There are two trains that connect the airport with downtown Venice. They have direct links to and from many of Venice's train stations, including the central station.

This small airport is located 30 km / 19 miles from the city centre and receives regular charter flights. It is sometimes referred to as the San Giuseppe airport and although small, the arrivals hall contains a tourist information booth, bureau de change and three car hire companies - Hertz, Avis and Europcar. There is also an ATM in the departures area and several tour and airline offices. Venice Treviso Airport does not operate a left-luggage service.