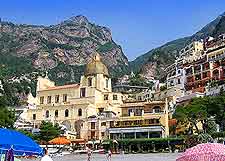 Although the Positano beaches and coastline have always been the main draw card, the town does have its fair share on landmarks and contains a number of noteworthy sights if you know where to look. The appearance of Positano's cliff faces are particularly special, being crammed with so many small houses and colourful buildings, each of which is jostling for a position with a view.

Within the centre of Positano, the main landmarks are to be found directly north of the Spiaggia Grande beachfront and include such sights as the Chiesa di Santa Maria Assunta and the Town Hall itself. Something quite different and created entirely by nature is the Grotto Esmerelda (Emerald Grotto), an atmospheric sea cavern on the Amalfi Coast, which can be reached by either bus or boat. 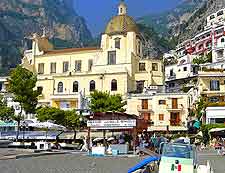 Address: Piazza Flavio Gioia, Positano, Italy, IT
Boasting an eye-catching central dome clad in beautiful majolica tiles, the Chiesa di Santa Maria Assunta can often be seen glistening in the Italian sunshine. The church is known to date back as far as the 10th century and contains many historical artefacts of a religious nature. An important local landmark in Positano and very much standing out on the skyline, the Chiesa di Santa Maria Assunta is equally impressive when you step inside, for it houses tall pillars, archways, countless stone cherubs and a rather famous Byzantine Black Madonna from the 13th century.
Open hours: daily - 08:00 to 12:00, 15:30 to 19:00
Admission: free, donations suggested

Address: Via G. Marconi 111, Positano, Italy, IT
Tel: +39 089 812 2511
Enjoying an elevate setting in the centre of Positano, the Town Hall is one of the town's most recognisable and attractive landmarks, being used for a variety of different purposes. The Town Hall overlooks much of Positano and the views of the shoreline are nothing short of spectacular. During the week, you will often find weddings (civil ceremonies) taking place in the Town Hall and on the balcony itself. To reach the balcony and see the views for yourself, you will need to head through the central hall.
Open hours: daily, hours vary
Admission: charge for some events 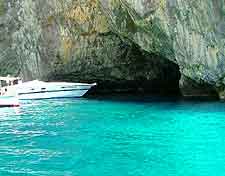 Address: Conca dei Marini, Italy, IT
Located in the neighbouring town of Conca dei Marini, just minutes away from Positano, the Grotto Esmerelda is amongst the most noteworthy natural landmarks in Campania. A fascinating sea cave which can be reached by either road or boat, the Grotto Esmerelda is often better known to tourists as the Emerald Grotto, due to the rich green colour of its sandy, watery floor. Guided tours by boat transport passengers right into the illuminated cavern, passing large stalactites and stalagmites along the way.
Open hours: daily, March to October - 09:00 to 19:00; November to February - 09:00 to 16:00
Admission: charge