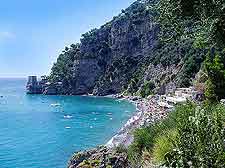 The town's early origins seem to be lost in the mists of history. According to mythology, the god Poseidon gave the land here as a gift to a nymph called Pasitea. However, archaeological evidence points to the remains of a Palaeolithic settlement around present-day Positano.

Positano may have grown up when pirates attacked a group of Romans, forcing them to land at this point on the Mediterranean coast. The Romans who did eventually settle here built many grand villas and the ruins of some of these are still visible today. However, it wasn't until the 9th century that the heart of the present-day town was first developed. At its centre was a Benedictine abbey. Its population rose as a result of immigrants fleeing from Saracen attacks on Paestum.

From Medieval Times to the 17th Century

During the Middle Ages, Positano was an important port town, In 1268, Positano was raided by Pisan forces. As a consequence, the town decided that it needed to strengthen its defences. Henceforth, the town could only be accessed via steep roads. Fortified walls were also built, punctuated with watch towers from which invaders could be seen well in advance.


During the history of the 14th century, Positano's fortunes were dented by first a huge tidal wave and then continual attacks by pirates. Matters didn't improve much in the hundred years that followed. This was a time of successive plague outbreaks. Matters were made worse in 1492 when a feud broke out between several families in the town.

In the 16th and 17th centuries, Positano developed its sea trade with Middle Eastern countries. In the main, spices and silks were traded. This was a period of relative peace and prosperity. Grand baroque houses were built with terraces that overlooked the sea. Throughout the 18th century, Positano continued to enjoy its wealth. 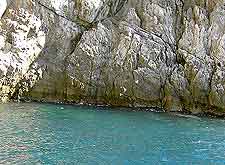 Such an optimistic situation was to change in the 19th century. The unification of Italy led to a decline in the town's importance. By the late 1800s, Positano's economy had declined to such an extent that more than half of its inhabitants had chosen to emigrate, mostly to the United States, in search of their fortunes. By the end of the 19th century, Positano had reverted to being little more than a small fishing village.

The town did not fare well during World War One history, with many of its inhabitants being lost during the conflict. After World War Two, most notably during the 1950s, the town transformed itself into a haven for tourists. Most were well-heeled authors and artists. John Ernst Steinbeck, the acclaimed US author, was among them. In a published article, he famously described the town as a 'dream place'. 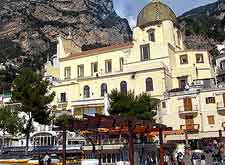 Positano also became a chic resort for Hollywood actors and celebrities, including the likes of film director Zeffirelli and movie legend Elizabeth Taylor. On the back of Steinbeck's prose, other tourists were drawn here. Many of the town's more exclusive villas were a product of this 'golden' post-war period.

More recently, Positano has served as a backdrop for several notable films, while tourism has become the staple industry in the town.