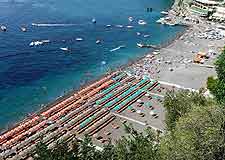 There are a number of well-supported festivals in Positano worth noting, amongst the many additional seasonal attractions and beach-related things to do. Each year at the end of April or the beginning of May, the unusual Cartoons on the Bay International Festival of Television Animation is staged, often directly after the very famous French Cannes Film Festival.

The Cartoons on the Bay Festival is held on Positano's beachfront in a specially constructed 'Cartoon Village' where all of the various animated movies are screened and the prestigious awards presented. If you are staying in Positano at this time, you can expect lots of movie-related events, live entertainment, parties and plenty of fun. 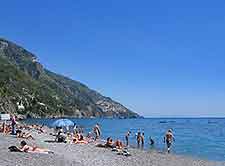 Soon afterwards as early summer arrives, the Vittorio de Sica Film Festival is hosted, another very noteworthy film festival which is held annually in June. The month of June is a busy time in Positano, with other events including the Positano Prize for dancing, and the Moda Mare fashion shows.

Towards the end of August or the beginning of September, Positano plays host to the ever-popular Summer Festival, where lovers of classical music flock to this festival of international chamber music, to enjoy the various concerts staged at venues around the town, both indoors and in the open-air.

Brightening up the winter months in Positano are a number of Yuletide events. You can be assured of a good choice of parties on New Year's Eve, and even surprisingly for many, a fish festival as well.