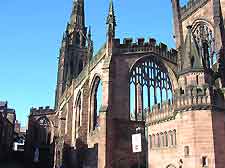 A city with a strong and interesting medieval past, Coventry is full of striking landmarks and monuments, both old and new. From the past, Coventry's St. Michael's Cathedral, St. Mary's Guildhall and the remaining City Gates are significant structures and reminders of the heritage.

More modern and equally impressive, the Millennium Place is a striking development and fits in well with the revitalised image of the city. 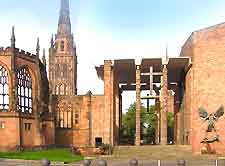 Address: 1 Hill Top, Coventry, West Midlands, CV1 5AB, England, UK
Tel: +44 (0)024 7652 1200
A breathtaking and somewhat haunting medieval structure, Coventry Cathedral is the centrepiece of this attraction, which also comprises three individual gift shops, the Benedicts Restaurants and the modern New Cathedral. Built between the 14th and 15th centuries, much of this grand building was sadly destroyed in 1940, when it was bombed during the war.
Open hours: Monday to Saturday - 09:00 to 17:00, Sunday - 12:00 to 16:00
Admission: free, donations suggested 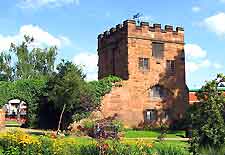 Address: Cook Street, Coventry, West Midlands, England, UK
Cook Street and Swanswell Gates are the city's only two medieval gates still standing in the city and are currently in a good state of repair. There were originally 12 individual gatehouse buildings around the city of Coventry, built towards the end of the 14th century. The Cook Street and Swanswell Gates sandwich the city's best preserved section of city wall, offering an insight into the city's past appearance and layout.
Open hours: daily - 24 hours
Admission: free 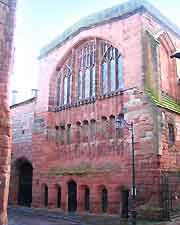 Situated in Coventry city centre, St. Mary's Guildhall is one of the best examples of its kind in the whole of the country. St. Mary's Guildhall first opened its doors in the middle of the 14th century, although its Great Hall dates from slightly later and contains a particularly impressive tapestry. The Guildhall's Mary Queen of Scots Room gained its name as it was here that the famous Scottish Queen was imprisoned in 1569. St. Mary's Guildhall hosts a number of significant events during the year.
Open hours: April to September, Sunday to Thursday - 10:00 to 16:00
Admission: free, guided tours are available and should usually be booked in advance

Address: Bayley Lane, Coventry, West Midlands, England, UK
Constructed in the early 1830s, Drapers Hall is famous for its links to the city's historic clothing industry, which was at its peak during medieval times. With a number of grand rooms with period features, including a ballroom, the building is only viewable from outside.
Open hours: daily - 24 hours
Admission: free 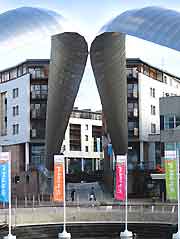 Address: Millennium Place, Coventry, West Midlands, England, UK
An integral part of the city's new image and spectacular £50 million Millennium Project, the Millennium Place is situated in the very centre of Coventry, next to Hales Street, Fairfax Street and Trinity Street. This is a major public space and contains a number of striking art works and structures, such as the Francoise Schein's 24-hour clock, the Whittle Arch and the Glass Bridge, which links the nearby Garden of International Friendship.
Open hours: daily - 24 hours
Admission: free

Address: Oxford and Coventry Canals, West Midlands, England, UK
Tel: +44 (0)24 7623 1306
Hawkesbury clearly shows the meeting point of both the Coventry Canal and the Oxford Canal, and is often referred to as the 'Sutton Stop'. Historically this spot was once a place where workers of the boat industry met and is now especially busy with pleasure boats. Many people moor their boats at this point and head to the Greyhound Pub, which has become known for its traditional fare and fine ale.
Open hours: daily - 24 hours
Admission: free

Address: Manor House Drive, Coventry, West Midlands, CV1 2ND, England, UK
Tel: +44 (0)24 7683 3141
Cheylesmore Manor can be found on the southern side of Coventry and is a historic city gatehouse. Today, the manor has become a grade II listed building and is now the home of the city's registry office. The exact origins of this building are unclear, although parts of the structure are believed to date back to the mid-13th century.
Open hours: daily, interior by appointment only
Admission: free