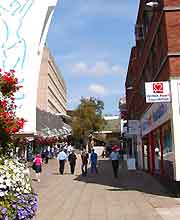 Coventry truly offers a jam-packed calendar of festivals and family events, which take place all through the calendar.

Many of the most successful annuals events and festivals in the Coventry area are held at the Heritage Motor Centre, the Ryton Organic Gardens, Hatton Country World, Stoneleigh Park and also at the War Memorial Park.

Further festivals and celebrations take place close to the city of Coventry and you can be sure that there is always something going on at nearby Warwick Castle, with plenty to things to see and do whatever the time of year.