Getting Around, Oxford Travel, Transport and Car Rental 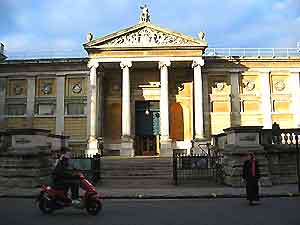 Oxford is well connected to surrounding cities by a number of motorways, and those who wish to travel to nearby London will be able to reach the capital in approximately one hour, via the M40 motorway. However, this journey can take considerably longer if you choose to travel during peak commuting hours.

If the sun is shining and you have plenty of time on your hands, then the best way to get around Oxford city centre is by walking. Alternatively, you can always hire a bicycle for the afternoon, or perhaps enjoy an hour or two of punting along the River Cherwell.

Those who are looking to explore the principal attractions can make use of the convenient City Sightseeing bus transport, alighting at a chosen stop and re-boarding another later bus, making full use of your hop-on hop-off ticket. If you are intending to travel outside of Oxfordshire for the day, then the train station is likely to be the best place to head if you don't have your own set of wheels.

Oxford has excellent connections to a number of major airports. London Heathrow Airport (LHR) is just 90 minutes away, while London Gatwick Airport (LGW) is around two hours drive from the city centre. Nearby Kidlington, roughly 20 minutes to the north, does boast its own small airport, although this is mainly reserved for private aircraft and charter planes. Occasional domestic and international flights are available at Kidlington, flying between a very limited selection of destinations, such as Geneva, Guernsey, the Isle of Man and Jersey.

The district of Oxford is served by a number of major roads and nearby the city connects to the M40 and M25 motorways, which travel to cities including London. Although the traffic can become a little congested during peak commuting hours (07:30 to 10:00 and 16:00 to 18:00), driving in central Oxford is fairly easy. It should be noted that a number of central roads are one-way only, or restricted to buses and taxis.

There are plenty of parking garages and off-street parking areas available in Oxford, although many areas are restricted to residents only and therefore parking permits may be required. There are also several park-and-ride services nearby the Ring Road, where you can park your car on the outskirts and travel into the centre by bus. These large car parks are located in Seacourt, on the Botley Road, Pear Tree - off the A34 Stratford road, Thornhill - near to the Ring Road on the A40 London Road, and Redbridge - close to the Ring Road junction for the A34 south to Abingdon.

Walking around the centre of Oxford comes highly recommended, particularly if you are a tourist planning a day of shopping or sightseeing. The city centre is quite compact, with some streets now being completely traffic-free, although do watch out for cyclists who occasionally use the pavements. If you are a keen walker, then perhaps you may like to join one of the Tuesday and Thursday lunchtime circular walks, which are led by local volunteers and generally last in the region of an hour, departing from the Carfax Tower just after midday.

Address: Gloucester Green, Oxford, England
Tel: +44 (0)1865 785400
Operated by both Stagecoach and the Oxford Bus Company, the public transport system covers the city well and buses are heavily used by locals, providing a very inexpensive way to get around. You simply pay the driver as you board (change is always available), although passes can be purchased and remain valid for set periods of time.

Buses and coaches travel to many other towns and cities nearby, including Abingdon, Banbury, Didcot and also Woodstock. Most buses depart from the main bus station at Gloucester Green, which is located near to the Worcester College, as well as from St. Aldates and the railway station.

The National Express coach service has numerous coaches that travel to London, including both Heathrow and Gatwick airports, as well as many other locations throughout England.

Address: Botley Road, Oxford, England
Tel: +44 (0)845 7484950
Oxford's train station is located on Botley Road, close to the bus station and the city centre. The station links to an excellent network of trains that travel throughout the country and this is the quickest way to reach London (Paddington) - which takes around one hour, Coventry - one hour, Birmingham - one and a half hours, Worcester - one hour and 20 minutes, and Hereford - two hours, as well as connecting Leamington Spa - 40 minutes, Reading - 25 minutes, and Slough - 40 minutes. Advance seat reservations can be booked if required and cycle racks are available. Of note, the main connecting trains stations are Banbury and Didbury.

Further services include the First Great Western trains to Bicester and Worcester (the Cotswold Line), as well as the Cross Country Trains to Manchester and Southampton.

Taxis can be easily caught from the ranks outside of the train station, bus stations, on St. Giles, George Street and St. Aldates. Also in quieter areas, taxis can be arranged by phone, along with private-hire minicabs (agree the fare before departing). Fares are calculated in official taxis by meters and whilst taxi travel around Oxfordshire can prove pricey for anything other than short journeys, when the cost is shared with other passengers, it becomes much more affordable.

Bicycles are a popular way to travel around recreational areas of Oxfordshire, with the country's waterways and towpaths offering scenic cycleways along the River Thames and the Oxford Canal, although these routes can get a little narrow at times. Official cycle lanes connect the city centre with the neighbourhoods and suburbs of Blackbird Keys, Headington, Iffley, Jericho, Old Marston, Summertown and Temple Cowley.