As a famous university city, many of Oxford's most recognisable and impressive landmarks tend to be related to its plentiful colleges. Some are literally centuries old and serve as the backbone of the city's strong period character.

The centrally located grade-I listed Clarendon Building was built in the second decade of the 18th century, while another prominent sight is provided by the Bridge of Sighs skyway, which spans New College Lane and connects different buildings belonging to Hertford College.

Other landmarks of note around Oxford include the Town Hall, the Martyrs' Memorial, St. Michael at the Northgate and the Taylor Institution, which comprises a series of European-language libraries. Leading into the Tom Quad and located just across from Pembroke College, the Tom Tower came into being at the hands of world-famous architectural genius of the second-half of the 17th century and early 18th century, Sir Christopher Wren. 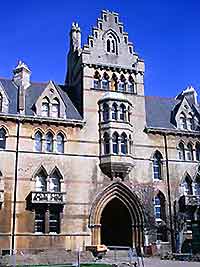 Address: St. Aldates, Oxford, OX1 4EY, England
Tel: +44 (0)1865 249811
The spectacular Town Hall can be found in the central St. Aldates area and was built in the late 19th century. Featuring impressive Victorian architecture with many classical features, the hall is now home to the Museum of Oxford and a number of meeting rooms.

Address: New College Lane, Oxford, Oxfordshire, OX1 3BL, England
The Bridge of Sighs has become synonymous with the historic city of Oxford and stands in the very centre. This important and extremely beautiful landmark was built in the early 1900s and is not only beautiful, but also highly functional, connecting the Hertford College buildings.

Address: Broad Street, Oxford, OX1 3BA, England
Located close to Exeter College and the Museum of the History of Science, the Grade-I listed Clarendon Building features imposing architecture and many original features. This historic building was constructed between the years of 1711 and 1715, and is now part of the Bodleian Library, although sightseers should note that the building is not open to the public.

Address: St. Giles, Oxford, OX1, England
The Martyrs' Memorial was built in the mid-19th century to commemorate the lives of Oxford Bishops Cranmer, Latimer and Ridley, who were burned at the stake during the 16th century. This grand monument stands to the south of St. Giles Cathedral and functions as an important reminder of the city's past. 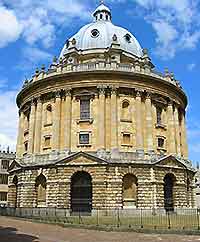 Address: Radcliffe Square, Oxford, OX1 4AJ, England
The stunning circular dome and drum of the Radcliffe Camera building can be found alongside Brasenose College and close to Hertford College, where it was built between 1737 and 1749. It was originally intended to house a new library and is now the main reading room within the Bodleian Library complex, with underground rooms holding around 600,000 books and various local Oxfordshire artefacts. Just a short stroll away is the Sheldonian Theatre and Christ Church Cathedral.

St. Michael at the Northgate

Address: Cornmarket Street, Oxford, OX1, England
St. Michael at the Northgate stands nearby Jesus College and is one of the oldest buildings in the entire city. This important local landmark dates back almost 1,000 years and features two towers, the Bocardo prison, a collection of silverware and historic architecture. 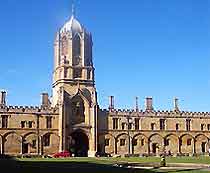 Address: Christ Church, St. Aldates Oxford, OX1 1DP, England
Tel: +44 (0)1865 276150
Tom Tower, in the St. Aldates area, is an important and historic structure dating all the way back to the late 17th century. This square tower comes complete with an octagonal lantern and domed roof, being sited above the entrance to Christ Church College and home to the largest bell in the city. 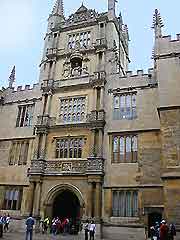 Address: Broad Street, Oxford, OX1 3BG, England
The vast New Bodleian Library is one of the city's more modern landmarks and was built in 1937. Featuring a total of 11 floors, underground areas, more than five million books and around 160 km / 100 miles of shelving, the library ranks amongst the largest and most comprehensive libraries in the world and is open to local university students only. Attractions in the vicinity include the New Theatre, the Parish Church of St. Mary Magdalen and the William Baker House.

Address: Carfax, Oxford, OX1, England
Containing a ring of six bells, Carfax Tower was built almost 800 years ago and was originally part of St. Martin's Church from the 13th century. The church has since been demolished, in order to make more room for traffic, but the tower still remains standing here, in surprisingly good condition, considering its age. At approximately 23 metres / 75 feet, the tower provides spectacular panoramic views of the city centre, being open on a daily basis (10:00 to 17:30, winter - 10:00 to 15:30). Of interest, no surrounding building is permitted to exceed this height.