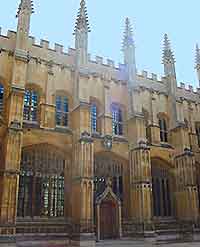 The history of Oxford is so closely tied up with its university that it's hard to extricate one from the other. This 'city of dreaming spires', however, has a rich heritage in its own right.

Evidence of ancient settlements on the present-day site of the city can be found in abundance. Port Meadow was once the site of a Bronze Age camp. The university grounds have also brought forward a wealth of archaeological finds that date back to pre-historic times. The first signs of a community on the site are thought to date from the 8th century AD, when a monastery was founded on the site of Christ Church. Oxford probably owes its name to the ford that allowed people to cross the River Thames at that time.

In 1066, the Normans arrived in the city and quickly made their presence felt. Lord Robert D'Oily was appointed governor and, in 1071, he succeeded in building a heavily fortified Oxford Castle. Years later, it was to become the scene of a rather dramatic event. Queen Matilda, who was holding the city against her enemy King Stephen, found herself besieged within its walls. However, at some point during the snowy winter of 1142, she managed to lower herself on ropes wearing a white dress, and escaped.


Several religious communities were also set up at this time. It's believed that the city became a centre for training clerics and it is from these that Oxford University evolved. The first written evidence of a university here can be found in 12th-century records. Certainly, by the 13th century, Oxford University was firmly established. Students came to study from all over Europe. 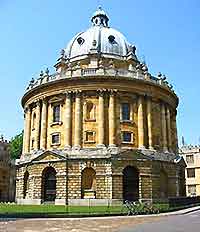 The university's growth was not without conflict. In particular, there was evidence of growing dissension between 'town' and 'gown'. This resulted in a decree that students had to henceforth live in approved halls. Later, these halls were replaced by individual colleges, the earliest of which was University College, created in 1249. The colleges of Balliol and Merton also date from the mid-13th century. In the late 15th century, new colleges were founded to allow for an increase in students.

From the Tudors to the 17th Century

During Henry VIII's reign, Oxford University moved away from its religious origins, introducing other subjects, such as law, medicine and Greek. Henry's Anglican reforms were carried on by Queen Mary. She ordered the trial of the Oxford Martyrs in 1555. Archbishop Thomas Cranmer, Hugh Latimer and Nicholas Ridley were all burnt at the stake on what is now named Broad Street.

The city went on to play an important role during the English Civil War. King Charles set up his headquarters here and the university's colleges contributed to royalist funds. During the Siege of Oxford in 1646, the city eventually ceded.

From the 18th Century to Today

The city grew apace from the start of its 18th century history. The Radcliffe Infirmary was built, as was the Magdalen Bridge. A Bluecoat School was also opened. In 1790, a canal was built that connected the city with Coventry. A later canal linked the city with the River Thames at Isis Lock. The arrival of a railway in 1844 linked Oxford and London, helping to fuel the city's growth.

In the early 20th century, the city became a major player in the publishing industry. During that period, William Morris also started his Morris Motor Company in nearby Cowley, thus establishing Oxford as a centre for car manufacturing until its eventual decline from the 1980s on.