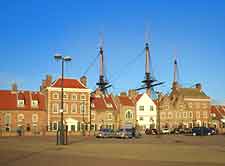 A port town in County Durham, Hartlepool has been successful in creating a new, rather more tourist friendly image for itself, helped in no small part by continued investment and the hosting of the prestigious 2010 Tall Ships' Races. The Hartlepool of today is almost unrecognisable compared to the town of 20 years ago, and its transformation is at its most impressive around the former South Docks, which are now home to a vibrant 500-berth marina, full of luxury yachts and surrounded by waterfront bars, restaurants and shops.

The bygone days of the town can be traced as far back as the days of the Iron Age, with the remains of an ancient settlement discovered at Catcote Village. 'Old Hartlepool' once occupied the Headland peninsula, before the town relocated its centre to the west, and consequently the Headland area is rich in history and Christian heritage, being somewhat enhanced by the presence of the beautiful St. Hilda's Church. In the 'new' town centre, the Hartlepool Tourist Information Centre (TIC) stands on Church Square and is housed within the renovated Christ Church, which it shares with the city's art gallery. 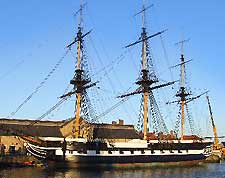 Just a very short drive away from Hartlepool are a number of beaches, including the neighbouring seaside resort of Seaton Crew, where hotels overlooking the North Sea are in demand. The first port of call for most tourists is the town's centrepiece - the Hartlepool Maritime Experience and the Historic Quay, where the atmosphere and excitement of a busy seaport from the 18th century is successfully recaptured, transporting visitors back to the maritime days of Napoleon and Lord Nelson. Green spaces around the town are in good supply, with the Tees and Hartlepool Foreshore and Wetlands being a good place to come and spot wild common seals. Both the Summerhill Nature Reserve and Outdoor Sports Centre, and the Saltholme Wildlife Reserve and Discovery Park provide further recreational activities, while for something quite different, the Town Hall Theatre offers live evening entertainment and regular concerts. More information about Hartlepool Tourist Attractions. 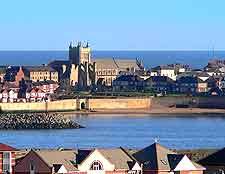 There are many historic and important landmarks spread around Hartlepool, both large and small. The medieval remains of the Town Wall reside on the Headland, near to the small Fish Sands beach, along with a famous seafront cannon, the Heugh Lighthouse, the Heugh Gun Battery and the recently created Town Square. Also on the Headland is the Borough Hall, which is an imposing building used to host local events and functions. Next to the marina, the famous statue of the Hartlepool Monkey recounts the legendary tale, when during the Napoleonic Wars, a monkey dressed in French uniform was discovered in a wrecked ship and believed to be an actual Frenchman, since locals could not understand his unusual 'foreign' language. More information about Hartlepool Landmarks and Monuments. 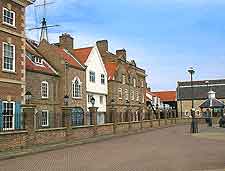 One of the best free shows in town is the Museum of Hartlepool on Jackson's Dock, which is part of the Maritime Experience and traces local history right back to 3,000 BC. Next door is the HMS Trincomalee, a rescued 200-year old sailing ship that is the proud owner of a World Ship Trust's International Maritime Award. Visitors to the HMS Trincomalee will find that the ship is full of information recounting life onboard a British Navy ship in the early 19th century. Also on Jackson's Dock is the floating vessel named the Wingfield Castle - a historic paddle steam ship launched in 1934 and the town's biggest single museum exhibit. Away from the waterfront, the Hartlepool Art Gallery contains both contemporary and traditional art works, and the opportunity to enjoy some superb views of the town, at the top of its tall church tower. More information about Hartlepool Museums. 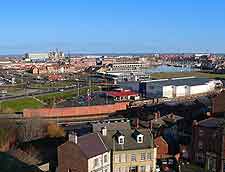 Day trips from Hartlepool are made all the easier if you are prepared to drive or stick to the timetables of local bus transport, and the Tees Valley area contains more attractions than you will likely have the time to properly explore. In the borough of Redcar and Cleveland, the tourist hotspot of Saltburn by the Sea offers traditional seaside attractions, as does the nearby small harbour town of Seaham, where the recently opened Byron Place shopping centre has helped to further increase its overall appeal. To the north-west of Hartlepool, the city of Sunderland makes for an interesting excursion and is home to a steam railway, historic windmill, castle ruins and further beaches - those of Roker and Seaburn. Newcastle upon Tyne is less than an hour away and this lively cosmopolitan city is really not to be missed. If you have time and are able to travel a little further, then you may even like to consider day trips to the cities of Leeds and York. More information about Hartlepool Attractions Nearby. 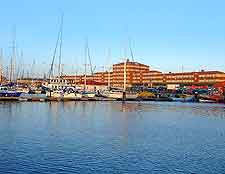