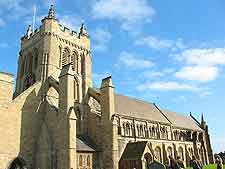 Many of the varied landmarks of Hartlepool are to be found clustered within the historic Headland area, with the most obvious including the Heugh Gun Battery, the Heugh Lighthouse and the Town Wall. St. Hilda's Church is also located on the Headland and is to be found next to Victoria Place and Manners Street, being just a stroll away from Fish Sands and the town's famous cannon.

The Borough Hall also stands on the Headland, where it is actually the town's largest and most imposing landmark. Away from this area and next to the marina is the statue of the Hartlepool Monkey and its interesting tale, where it is said that locals at the turn of the 19th century once believed that a shipwrecked monkey was actually a rather small and hairy Frenchman. 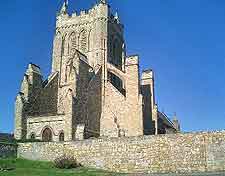 Address: The Rectory, Church Close, Hartlepool, County Durham, TS24 0PW, England, UK
Tel: +44 01429 267030
An important Grade-I listed landmark in the town, St. Hilda's Church lies just off Middle Gate and Durham Street, towards the tip of the Headland. This historic parish church is easy to spot on the skyline behind the Historic Quay and is known to date as far back as the late 12th century. The architecture of St. Hilda's Church incorporates a series of different styles, resulting from various renovations over the years, with the tower and the nave being the oldest parts. As you tour the inside, look out for the grand church organ, which was first built in the 1870s and has been rebuilt since.
Open hours: visitor centre, April to October, Wednesday, Saturday and Sunday - 14:00 to 16:00; November to March - Saturday - 14:00 to 16:00
Admission: free, donations welcomed 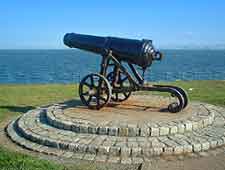 Address: Hartlepool, County Durham, England, UK
The Town Wall originates from the latter part of the 14th century and this lengthy limestone boundary once encircled the entire medieval town, being built to provide security and sea defences. Today, only part of this ancient town wall remains, on the southerly side of the Headland, close to the Victoria Docks. In particular, the Sandwell Gate is quite impressive and is more than 2.5 metres / 8 feet deep. Close by, a well-preserved 19th-century cannon faces the sea, being presented to the town in 1857, after being captured from the Russians during the Crimean War.
Open hours: daily - 24 hours
Admission: free

Address: Victoria Square, Off Victoria Road, Hartlepool, County Durham, England, UK
Enjoying a prominent location on Victoria Square, the West Hartlepool War Memorial is dedicated to those from West Hartlepool who sadly lost their lives during the First World War, when in 1914, three German battleships arrived unannounced at the crack of dawn and fired their shells, killing more than 100 residents. This granite obelisk was erected in 1923 and comprises a cross, wreath and an inscription stating 'Thine O lord is the victory'.
Open hours: daily - 24 hours
Admission: free 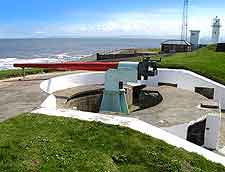 Address: Moor Terrace, Hartlepool, County Durham, TS24 0PS, England, UK
Tel: +44 01429 270746
One of three individual gun defences erected in the 1860s to help protect the town's coastline, the Heugh Battery holds an important place on Hartlepool's history, being operational for nearly 100 years. This attraction explains how this station naturally evolved, being first equipped with bore cannons, and later upgraded to modern weaponry, controlled by radar. However, the most thought-provoking exhibits tell of the battles that these guns have seen, and the men who once fought here. The Heugh Gun Battery now appears as it would have during the two World Wars and also features a fascinating collection of artillery and memorabilia, including anti-aircraft guns. The site itself has a museum, a magazine chamber, a command post, emplacement guns and platforms, and underground storage.
Open hours: Thursday to Sunday - 10:00 to 16:00
Admission: charge, discounts for children under 16 years old and families (two adults and two children), free for veterans, servicemen and children under five years old

Address: Middlegate, Hartlepool, County Durham, TS24 0JS, England, UK
Tel: +44 01429 266269
Standing on the ancient Headland and close to the coast, the recently renovated Hartlepool Borough Hall offers an extensive calendar of functions and festivities. This grand building is regularly used to host weddings, seasonal parties, performances and various other events, which in the past have even included boxing matches and a Morissey concert. When used as a theatre, the main hall is capable of accommodating seated audiences of approximately 1,200 people, while its Croft Room and Constables Bar cater to considerably smaller crowds.
Open hours: hours vary
Admission: charge for some events 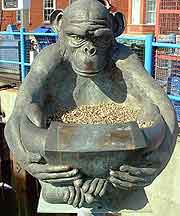 Address: Marina, Hartlepool, County Durham, England, UK
The Hartlepool Monkey is a much-loved local statue sited near to the lock gates of the marina. A very famous local landmark, the story of the monkey has been passed down by families and although it is now little more than a legend, it does make for a good tale. It is said that during the Napoleonic Wars a French ship was wrecked near to the shore and its sole survivor was a monkey, dressed in a sailor's outfit. The locals were unable to understand the monkey's language and believed him to be a Frenchman, who was subsequently executed by hanging. This realistic statue is depicted holding a money box inscribed with 'Make a Wish for the Money'. All donations are given to a local hospice.
Open hours: daily - 24 hours
Admission: free