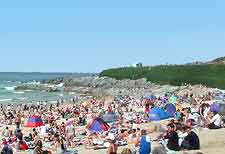 Tourism in Newquay has been flourishing for many, many years and this is without doubt one of the liveliest places to spend a summer holiday in the whole of Cornwall. England's top surfing location, Newquay appeals to a diverse cross section of holiday makers, with something to suit all ages.

A fairly modern Cornish town, Newquay does offer some historic character and remnants of its fishing past, such as the 14th-century lookout house on one of its cliff tops. Whether you are coming here to experience the excitement at the annual 'Run to the Sun' VW festival, participate in the 'Rip Curl Boardmaster' surfing championships or simply to enjoy to sun, sand and legendary nightlife, Newquay will certainly not disappoint. For local tourism information and to make sure that you make that most of your time here, be sure to visit the Newquay Tourist Information Centre at the Municipal Offices on Marcus Hill. 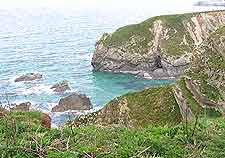 As with much of Cornwall, this seaside town really comes alive during the summer, when holiday makers arrive in their droves and head to the sandy beaches, often bringing their surfboards. Much of Newquay has a youthful vibe, whilst still appealing to families and seniors alike. There are a huge number of guest houses in the area, and those wishing to save money by camping may like to consider pitching their tent at the popular Porth Beach Tourist Park, on the north-easterly outskirts of the town. Self-caterers will find that Newquay holiday cottages are an especially good choice, with further lodging options being located in the surrounding towns and villages such as Crantock, Holywell Bay, Padstow, Perranporth and St. Agnes. More information about Newquay Hotels and Accommodation.

Newquay is home to a superb group of beaches alongside the Atlantic Ocean, boasting fine golden sand and good facilities nearby. The main beaches in Newquay include Fistral Beach - an extremely popular stretch, known for its surfing; Towan Beach - near to the town centre and the harbour; and Tolcarne Beach - a scenic spot known for its colourful beach huts. Around many of the beaches, the surfing conditions are truly outstanding and Newquay is reputed to be the surf capital of the United Kingdom. Many enormous surfing events take place here each year, including the Rip Curl Surf Festival in July.

Newquay's principal tourist attractions include the Blue Reef Aquarium - standing alongside the beachfront and home to 30 different displays and a number of large sharks; Newquay Zoo - perfect for the family and home to a host of exotic creatures and educational animal information; Holywell Bay Fun Park - suiting all ages and offering fast rides, bumper boats, a climbing wall, laser shooting and more; Trenance Leisure Park - a spreading green space close to Newquay town centre and providing a diverse mixture of attractions, including a boating lake, the zoo and also Waterworld, with swimming pools, water slides, flumes, cannons and a viewing gallery; and a huge array of nightclubs - a truly superb selection of top nightspots often featuring well-known celebrity DJs and reputed to be amongst the best in the whole of Cornwall and beyond. More information about Newquay Tourist Attractions. 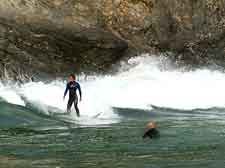 Prominent landmarks both in and around the Newquay area include Trerice - a well-known Elizabethan manor house with period furnishings and formally landscaped Tudor gardens; Newquay Harbour - a truly historic spot close to the action, still used by local fishermen today; and also the Newquay Discovery Trails - two individual walking trails passing many points of interest along the route, including the Gannel Estuary. More information about Newquay Landmarks.

Although Newquay may not be known for its art galleries and museums, there are several worth a look, such as Tunnels Through Time - with over 70 different characters from around Cornwall, including many who have emerged from local legends and tales; while the main art galleries include the Driftwood Gallery on the Central Square, the Crantock Gallery along Langurroc Road and the Cornwall Galleries on Bank Street. More information about Newquay Museums and Newquay Art Galleries. 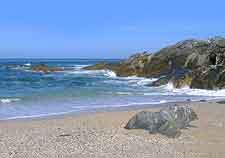 Must-see tourist attractions just a short distance from Newquay include the Eden Project - a popular tourist attraction in St. Austell, to the east of Newquay, featuring enormous 'Biodome' conservatories; the Lost Gardens of Heligan - spectacular landscaped gardens rediscovered after storm damage and subsequently restored in the 1990s; Springfields Pony Centre and Fun Park - on the eastern outskirts of Newquay and known for its animals and nature trails; Cornwall's Crealy Great Adventure Park - with fast rides, log flumes and plenty of excitement for all the family; Dairyland Farm World - an award-winning farm-related attraction with a play area known as the 'Bull Pen'; Lappa Valley Steam Railway and East Wheal Rose Park - a relatively short drive from Newquay and sited around St. Newlyn East, with rides along a particularly scenic stretch, and the Cornish Bird of Prey Centre - featuring an extensive collection of birds of prey and regular flying demonstrations. More information about Newquay Attractions Nearby. 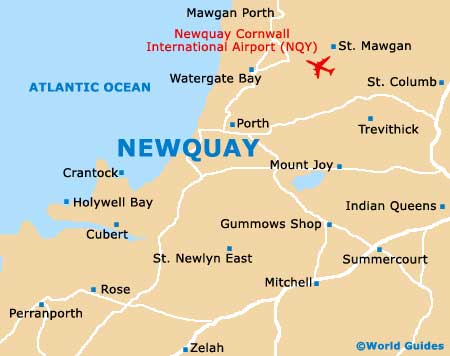