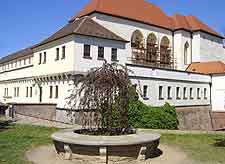 The tourist attractions within Brno include a number of historical monuments and important landmarks, with none coming bigger or more famous than the elevated Spilberk Castle. Close by and just below Spilberk Hill is the former Dominican Monastery (Dominikánsky Kláster), while tourists will also find a number of attractions within central Brno itself, particularly around the Square of Freedom (Námesti Svobody) and the Masarykova, such as the Church of St. Mary Magdalene.

The landmark Cathedral of St. Peter and Paul presides over the Petrov Hill and is known to have been constructed during the 14th century, being built on the actual site of an ancient pagan temple to Venus. Motor racing is another notable tourist attractions in Brno, although for families, the Zoological Gardens and the city's Planetarium will likely feature at the top of an itinerary. 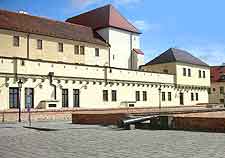 Address: Spilberk Hill, Brno, Czech Republic, CZ
One of the crowning landmarks within the whole of Brno, Spilberk Castle stands atop Spilberk Hill, from where it overlooks the historical Old Town district and dominates much of the skyline. Spilberk Castle dates back as far as the beginning of the 13th century and was formerly the home of a series of Czech kings, before it was transformed in the 18th century into an imposing military fortress. Tourists will find that the castle's main attractions include a couple of museums, along with an impressive Baroque pharmacy and also a tall lookout tower, offering superb views across the cityscape.
Open hours: daily - 09:00 to 18:00
Admission: charge 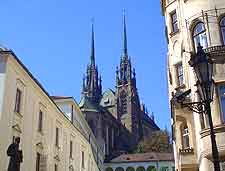 Cathedral of St. Peter and Paul

Address: Petrov Hill, Brno, Czech Republic, CZ
This simply enormous Brno Cathedral (Cathedral of St. Peter and Paul) is known locally as the Katedrála sv Petra a Pavla and has a number of interesting attractions to explore. These include the 11-metre / 36-foot tall altar, where you will find the figures of SS Peter and Paul, which were carved in the early 1890s. You can also climb the cathedral's tall tower, visit the crypt, or check out the adjoining Renaissance-style Bishop's Palace (Biskupská Palác). Also close by is the rather leafy Denisovy Sady Park, which lies around the base of Petrov Hill.
Open hours: Tuesday to Sunday - 10:00 to 17:00
Admission: charge, concessions

With a rich history relating to motor racing, many tourists head to Brno especially to watch a race. Motor racing has been part of Brno since as long ago as the very beginning of the 20th century. Motorcycle races have become a major part of the European Touring Car Championship, while the Czechoslovakian Grand Prix is always a big crowd puller at the Masaryk Circuit, as is the Moto GP.
Open hours: hours vary
Admission: charge for events

A notable modernist landmark and considered by many to be a masterpiece of contemporary architecture, Brno's recently restored Villa Tugendhat was constructed in 1930 and was actually built as a family residence for the wealthy Tugendhat family. The rather beautiful and simple building boasts a rather austere white facade and recently featured in the Hollywood movie, Hannibal Rising. In 2002, the Villa Tugendhat was declared as an acclaimed World Heritage Site, due to its architectural significance.
Open hours: daily
Admission: charge

Address: Kravi Hora 2, Brno, Czech Republic, CZ
Tel: +420 541 321 287
The Brno Planetarium is amongst the main tourist attractions for children in Brno and offers everything that you could possibly wish to learn about stargazing and the solar system. Visitors are treated to regular sky shows and a host of interactive displays.
Open hours: daily - 09:00 to 18:00
Admission: charge, discounts for children 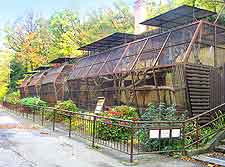 Address: Kravi Hora 2, Brno, Czech Republic, CZ
Tel: +420 546 432 311
Families will always enjoy spending time at the historical Brno Zoo, which first opened its doors to members of the public in the summer of 1953. Each year, more than 200,000 visitors enjoy the animals and other attractions within the zoo. Always popular are the parrots, Brazilian tapirs, zebras, leopards, falcons and comical meerkats. Bring your camera and take some snaps of the giraffes and the South African fur seals when they are being fed. The Zoological Gardens of Brno City are known for their part in nature conservation and participate in a number of international projects and conservation campaigns.
Open hours: daily, November to February - 09:00 to 16:00; March and October - 09:00 to 17:00; April to September - 09:00 to 18:00
Admission: charge, discounts for children and families, children three years old and under are free 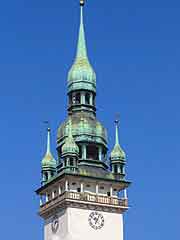 Address: Mecova 5, Brno, Czech Republic, CZ
The Old Town Hall is an important landmark in Brno and a good meeting point. Dating from the beginning of the early 13th century, the Old Town Hall has been remodelled somewhat over the years, although the original architecture was very much incorporated into its structure of today. Its Gothic-style turret is easy to spot, being somewhat crooked in its appearance. For just a small charge you can tour the interior of the Old Town Hall, with the main highlights including the Fresco Hall, Crystal Hall, the Treasury and also the legendary dragon, which is actually a stuffed Amazon River crocodile donated to the city some 400 years ago. A number of tourist attractions are also close by, such as the brewery on the Mendlovo Námesti.
Open hours: daily
Admission: charge 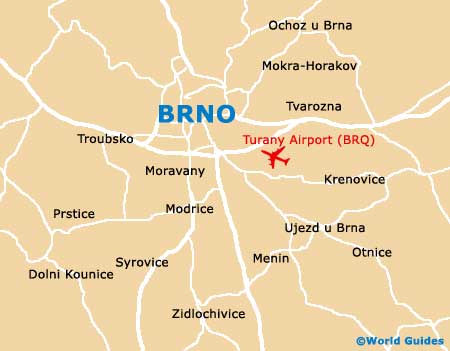