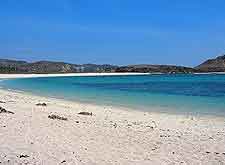 The Bali Ngurah Rai International Airport is the main air hub for air arrivals on this tropical paradise island. It is located on an isthmus in the south of the country, a short distance from the regional capital, Denpasar, and Bali's major southern beach resorts of Kuta and Legian. The facility, which is the second-largest airport in Indonesia, serves a passenger throughput of over 11 million every year.

Also known as the Ngurah Rai Airport, the complex holds two terminals and is the hub for national flag carrier Garuda Airlines and its international flights to Singapore, Japan and Australia. A total of around 25 full-service and low-cost airlines are supported here, providing domestic routes across Indonesia, as well as international flights to Hong Kong, Taipei, Bangkok, Amsterdam, Kuala Lumpur, Seoul, Moscow and a number of Chinese and Australian cities.

Bali's International Terminal is the larger of the two terminals and can become very crowded during the high season. The entire facility has recently been the subject of a massive expansion project aimed at increasing passenger capacity to 25 million, twice its former capacity. According to Balinese law, the new buildings were required to include traditional architectural elements.

The Jalan Bypass Ngurah Rai highway comes with clear signposts showing the way to Kuta and neighbouring beach resorts, as does the route to the regional capital of Bali, Denpasar. The drive north to Kuta takes just ten minutes, while the journey to Denpasar takes around 30 minutes.

Local buses depart from outside the Arrivals areas of both terminals to Denpasar, a 50-minute trip, while buses to Kuta Beach take just ten minutes. Other destinations along the coast and in the interior of Bali are also well covered. The traditional local form of transport, known as a bemo (shared minibus), is an inexpensive way to travel, while many local hotels provide direct shuttle services from the airport.

Taxi ranks are located outside of the Arrivals halls of both airport terminals, with the official taxi desk selling pre-paid vouchers in the Arrivals areas. Many popular beach resorts can be reached in less than 30 minutes by taxi, including Kuta.

For visitors travelling to other islands in the archipelago or around Bali's coastline, ferries operate from Kuta's Benoa Harbour, a ten-minute taxi ride north of the airport.