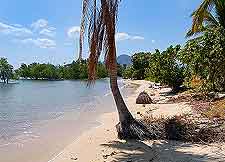 Many island attractions are relatively close to Bali, often being suitable for day trips. Popular excursions include part of the archipelago named the Lesser Sundra Islands, the attractions of Flores are close to Bali, as well as the islands of Komodo, Lembata and Sumbawa.

The island of Java is simply enormous and to the west of Bali. The fifth-largest island within Indonesia, Java has a population which tops 120 million, and so you can imagine that the main attractions are very spread out. You may also like to catch a ferry and explore the islands of Lombok, Nusa Lembongan and Nusa Penida. 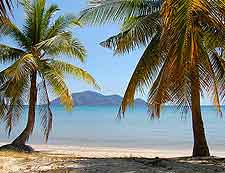 The island of Flores lies directly to the east of Bali and is home to a population of roughly 1.5 million. Attractions on Flores come in many guises, with superb scuba diving and snorkelling opportunities presenting themselves along the northerly coastline, as well as next to the westerly village of Labuanbajo, where harmless whale sharks can often be observed. However, the leading attraction on Flores is the Kelimutu volcano, which boasts three separate summit crater lakes, each of which is a different colour. 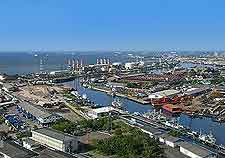 To explore Java properly, you will really need to spend an entire holiday here, although the top sights could certainly be enjoyed in just a few days. Prominent destinations on Java include the cities of Bandung, Banyuwangi, Bogor, Cirebon, Depok, Jakarta, Semarang, Solo, Surabaya and Yogyakarta. Both Jakarta and Yogyakarta are especially recommended and are linked to Bali by plane, suiting those short of time. 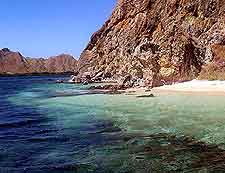 Komodo Island has become an important and very famous national park and is within Indonesia's Wallacea region. Located to the far east of Bali, next to Rinca and between the islands of Flores (east) and Sumbawa (west), Komodo makes for a very popular day trip, with boat loads of tourists arriving to marvel at its beautiful landscape, and flora and fauna attractions, which include boars, cockatoos, water buffalo, and of course, the Komodo Dragon, an enormous lizard that can reach more than 3 metres / 10 feet in length. Komodo National Park was actually founded in 1980 and has since become an important World Heritage Site. 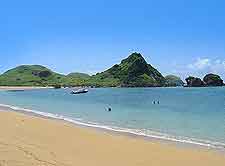 One of the Lesser Sundra Islands and part of the West Nusa Tenggara province, the island of Lombok is sited right next to Bali's easterly coast and is circular in shape, with an approximate diameter of 70 km / 43 miles. Around three million people call Lombok their home and welcome visiting tourists, who arrive in Lembar and often head straight for the beaches around Kuta, which are renowned by surfers for their strong waves. Lombok's city of Senggigi tends to be where the main tourist attractions reside, with plenty of seafood restaurants on hand, while nearby, the beach resort of Mangsit soon fills up. Other highlights include mountain trekking, the unusual beaches around Tanjung Aan, the weaving heritage within Sukarare, and the snorkelling around the neighbouring Gili Islands, where sea turtles can regularly be spotted. 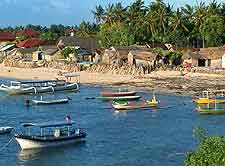 Nusa Lembongan is an especially beautiful island and is situated to the south-east of Bali, where it can be easily reached in under an hour, by using ferries from Sanur. Many tourists choose to stay on Nusa Lembongan for a night or two, where the tourism industry is far less developed and very inexpensive 'homestay' accommodation is often available. Interestingly, seaweed has long been a mainstay of this island and is farmed as a crop, using bamboo frames, which are often clearly visible around the coastline and add colourful patches to the sea. 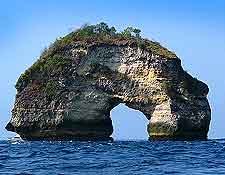 Nusa Penida is a popular island and to the south-east of Bali. Fairly arid in its initial appearance, Nusa Penida contains some exceptional white sandy beaches, which are very much grouped along the island's northern coast. The southern coast is quite different, with imposing limestone cliffs edging the rugged seafront. One of the main reasons that so many tourists come to Nusa Penida each year is for the scuba diving locations and related coastal attractions. The best diving spots are around Batu Abah, Batu Lumbung, Batu Meling, Penida Bay and Toyapakeh. Sampalan is the main town on Nusa Penida, with a busy central market area. Also of interest on the island are the Goa Karangsari caves, the weaving village of Tanglad, and the breathtaking waterfall at Batukandik. 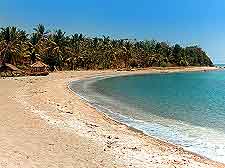 Sumbawa can be found to the east of both Bali and Lombok, and west of Komodo. This popular Indonesian island is roughly three times larger than Lombok and is populated with just over 1.5 million people. Sumbawa Besar is the island capital and lies on the western side, while the main surfing attractions are to be found within the Sekongkan area. To reach Sumbawa from Bali you will need to first catch a ferry to Lombok, travel by bus to the easterly seaport, and then take a further ferry.