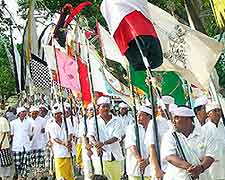 Bali has much to celebrate and most months of the year have something of interest happening, with various seasonal things to do and tourist-friendly events taking place, often within the countless temples. March is one of the most important festival months on Bali, with the exciting Melasti and Nyepi religious festivals taking place and always being the cause for much celebration.

Other popular events include the Bali Arts Festival, which kicks off in June for a month and showcases the island's cultural appeal. Independence Day takes place each year on August 17th and its colourful processions are watched by crowds of onlookers.