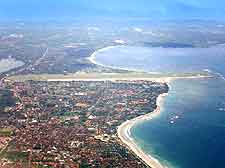 A small and very beautiful island in western Indonesia, Bali lies approximately 2 km / 1.5 miles to the east of Java island, and directly to the west of Lombok. In total, there are around 13,000 different islands within the Indonesian archipelago, of which Bali remains amongst the most popular and significant.

Bali stretches for around 144 km / 89 miles in width (east to west) and some 80 km / 50 miles in length (north to south), at the widest parts. In fact, it is quite possible to drive around the island's scenic coastline in just one day, passing beaches, hills, mountains and even volcanic areas along the way, although maps will likely be needed for those self-navigating, with their own set of wheels.

Most tourists holidaying on the island will find that South Bali is the place to stay, with many wonderful places of interest residing within Kuta, Seminyak and Ubud. The southern Bukit Peninsula is where you will find some of Bali's biggest resorts, while close by and to the east, Sanur is known for its excellent surf.

Denpasar is the capital city and also located in South Bali, where it serves as an important transport hub for the entire island. Also in South Bali and relatively close to Denpasar are the beachfront resorts of Jimbaran Sanur, Seminyak and Kerobokan, the surfing hotspot of Legian, and the charming village of Uluwatu. On the northern coastline of Bali, Lovina has become a popular area for scuba diving and snorkelling, with some very stunning coral reefs. It is around Lovina where you are most likely to spot dolphins swimming. 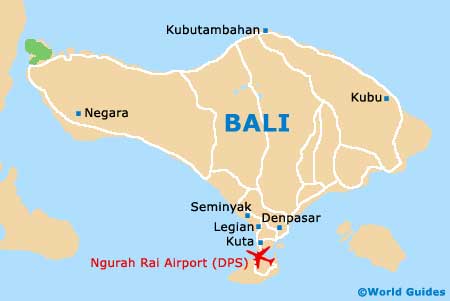