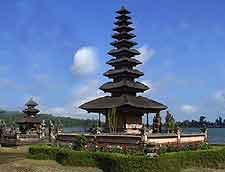 Bali is an island of temples, monasteries, monuments and historical landmarks, which are dotted around the island and make a fine change from the beach. The landmarks of Bali offer a chance to learn about Balinese culture and the island's rich Indonesian history.

Amongst the most impressive and spread around the island are the 'must-see' landmarks of the Mother Temple (Pura Besakih), the Elephant Cave (Goa Gajah), the striking Gunung Batur volcano, and also the moving Bali Bomb Memorial in Kuta. 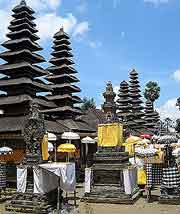 Address: Besakih Village, Rendang, Karangasem, Bali, Indonesia, ID
Tel: +62 0361 23 5300
Bali's most important temple complex, the Pura Besakih or 'Mother Temple', features dozens of temples loaded with statures of Hindu gods and goddesses. It is located to the north of Klungklung and is most popular during the Betara Kubun Ceremony in March and April, when the gods and goddesses allegedly take up residence. Apart from the temples and various landmarks, the surrounding scenery is stunning and mountainous.
Open hours: daily
Admission: charge (donation)

Address: Banjar, Bali, Indonesia, ID
Banjar Buddhist Monastery is one of the more tranquil monasteries of Bali and comes complete with a lotus pool and sculptures. The monastery was hit badly by an earthquake in the 1970s and was subsequently rebuilt by resident monks. Although visitors are welcome, you must pay an entrance fee, be properly dressed and are urged to keep noise to a minimum.
Open hours: daily
Admission: charge 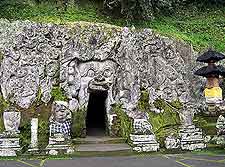 Address: Bedaulu Village, Ubud, Bali, Indonesia, ID
Tel: +62 0361 23 5300
The so-called 1,000-year-old Elephant Cave, located over the Petanu River, gets its name from the carving of a demon that has elephant-like ears at the entrance as opposed to any direct elephant involvement. Once you make out the carving, head inside and check out the various Hindu idols of Ganesha and phallic symbols.
Open hours: daily - 09:00 to 18:00
Admission: charge 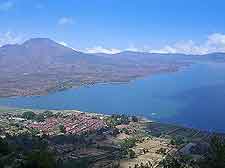 Address: Bangli, Kintamani, Bali, Indonesia, ID
Tel: +62 0361 23 5600
Gunung Batur is a striking volcano and amongst Bali's largest natural landmarks, once erupting and destroying an entire village, leaving just the so-called Lucky Temple left standing. Lake Batur is one of the highlights here today, a lake resting in a volcanic crater, while hot springs, a 1,000-plus year old temple and an ancient Trunyan cemetery are also noteworthy sights nearby.
Open hours: daily
Admission: charge for guide 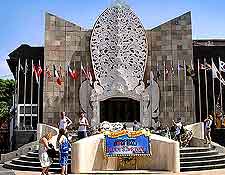 Address: Jalan Legian, Kuta, Bali, Indonesia, ID
The Bali Bomb monument commemorates the 202 victims of the Bali bomb attack in October 2002. This modern-day landmark stands on Legian Street at the site of the destroyed Paddy's Pub and features beautifully carved stone with a large marble plaque displaying the names and nationalities of those slain. The monument is well lit and particularly moving at night.
Open hours: daily
Admission: free 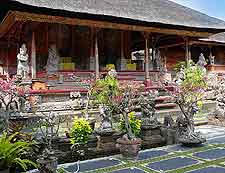 Address: Jalan Raya, Ubud, Bali, Indonesia, ID
Pura Saraswati is a fine temple with an intricately carved shrine and interesting pavilions. The temple, dedicated to the Hindu goddess of art and learning, was founded in the 19th century and comes with a stunning water garden. A good place to discern the garden is from the Café Lotus, which is situated on the main street.
Open hours: daily - sunrise to sunset
Admission: free