Getting Around, Port Elizabeth Travel, Transport and Car Rental 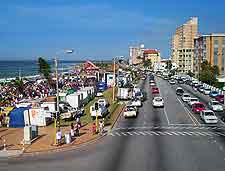 Public transport is fairly limited in Port Elizabeth and so the best way to travel around the city is on foot, or by car or taxi.

The city is fairly compact, so wherever you're staying, it's bound to be within easy reach of Port Elizabeth's main attractions.

Many tourists choose to travel around by minibus taxi for the sheer convenience. 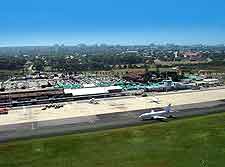 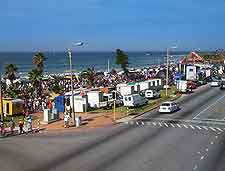 Hiring a car is a sensible option if you intend to do any amount of travelling around the Eastern Cape. Most of the major car hire companies have offices in the city or at the airport.

Port Elizabeth's main train station is located near the harbour. From here, it's possible to catch regular trains to Johannesburg, Bloemfontein and further afield. A Metrorail service travels to Uitenhage during the week, with a limited weekend service on offer too. A popular way of getting around is the Apple Express, a narrow-gauge tourist train that takes visitors from Humewood Road to Thornhill Village. 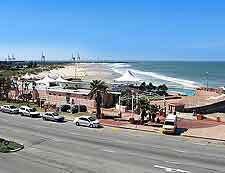 The public bus system does not have a great reputation. Parts of Port Elizabeth are not covered by bus routes and often bus transport can prove somewhat unreliable. Timetables can be found at the Tourist Information Office.

For travel to and from Port Elizabeth, the Baz Bus is a popular backpackers' bus service. Many of South Africa's large coach companies also operate services via the city.

Minibus taxi transport is a very popular in Port Elizabeth. They are in plentiful supply and are a relatively cheap, if not always safe, option of getting around the city.