Port Elizabeth Events, Things to Do and Festivals 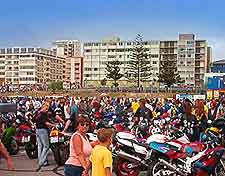 Many of the events and festivals held annually in and around Port Elizabeth feature sporting activities of one kind or another.

From swimming and running to surfing and cycling, sporty visitors and spectators will be spoilt for choice when it comes to things to do.


Port Elizabeth also hosts a number of festival and fairs, which celebrate the local food and drink in South Africa, together with culture and the arts.