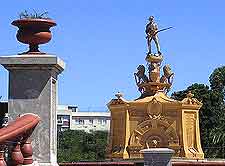 Port Elizabeth's parks have a reputation for being some of the most beautiful in the area.

It's little wonder that the city's many gardens have become popular attractions with tourists and locals alike.


As well as two well-known centrally located gardens, St. George's Park and Settlers Park, there are also a number of other green spaces that are located on the outskirts of the city. 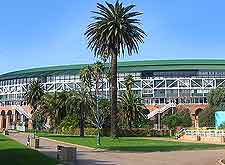 Address: Park Drive, Port Elizabeth, South Africa, ZA
Known as Port Elizabeth's 'Central Park', St. George's covers over 173 acres / 70 hectares of wooded parkland. There is plenty to see, including the park's botanical gardens, and an impressive collection of plants and specimen trees. The park also is home to the 19th-century Pearsons Conservatory, an open-air theatre, the Port Elizabeth Cricket Club, a swimming pool and the city's Bowling Green, said to be the oldest in South Africa. As if that wasn't enough, St. George's Park acts as a venue for many sports and cultural events, which makes it one of the most lively and vibrant places in the city.
Open hours: daily
Admission: free

This park is a great place for relaxing or to enjoy an afternoon with the family. As well as lawned areas and ponds, there are plenty of walking paths to follow, together with children's playgrounds. A subway connects Happy Valley to nearby Humewood Beach.
Open hours: daily
Admission: free

Address: How Street, Port Elizabeth, South Africa, ZA
Tel: +27 041 373 6794
This centrally located park is a great place for nature lovers, with plenty of flora and fauna to admire. Expect to spot at least 50 species of native garden and forest birds. A hiking trail offers an opportunity to really explore the natural environment. The flower displays and water features within the Settlers Park Nature Reserve are a real delight.
Open hours: daily - main car park gates open 07:30 to 18:00
Admission: free

Address: Limba Avenue, New Brighton, Port Elizabeth, South Africa, ZA
The Emlotheni Memorial Park is dedicated to six anti-apartheid activists who were executed in 1964. In the 1950s and 1960s, the site of the park was often used as a meeting place for ANC rallies.
Open hours: daily
Admission: free

Prince Alfred Park is an open public space with a small football stadium. A new multi-purpose stadium is planned for the 2010 World Cup, when Port Elizabeth will act as a host city.
Open hours: daily
Admission: free