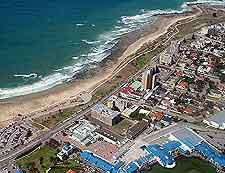 Port Elizabeth is one of South Africa's main sea ports and very much a working city. Most of its inhabitants live on the edge of the city, in one of Port Elizabeth's township districts.

Visitors tend to spend time in either central Port Elizabeth or in one of its beachside neighbourhoods. Whilst most attractions are centrally located in the city, it's certainly tempting to spend time enjoying the sunshine on one of the many available beaches or coastal locations, or taking advantage of the great surfing on offer. 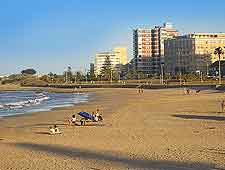 Summerstrand is an upmarket beachfront suburb in Port Elizabeth. Just a short drive from the very centre of the city, Summerstrand's daytime activities are centred on its beach. In the evening, visitors tend to congregate around the nearby casino complex.

Port Elizabeth's central district is full of reminders of the city's settler heritage, with monuments and attractions that take visitors back to those early days in the city. In recent years, there's been a drive to renovate this neighbourhood, making it a more vibrant place to visit. 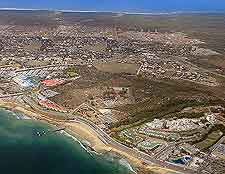 The Humewood district of Port Elizabeth is perhaps best known for its golf club. Humewood Golf Club is ranked among South Africa's top ten and has hosted the South African Open on several occasions. Humewood is also popular for its blue flag beach, which offers great shelter from the wind.

Mill Park is known as the garden suburb of the city. Located close to the city centre, it is home to St. George's Park and the Port Elizabeth Golf Club. A popular residential neighbourhood, the area is renowned for being relatively quiet, with attractive colonial-style houses. The Greenacres Shopping Centre is situated nearby. 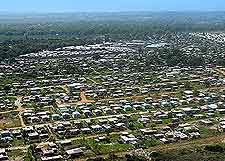 A short drive from the city's airport, as well as its beaches, Walmer is a beautiful suburb that has a great deal to offer. Walmer has a reputation of being one of the most upmarket suburbs in Port Elizabeth and is home to some of oldest families in the city.

It is well worth heading down to Richmond Hill, known as one of Port Elizabeth's most historic neighbourhoods. As well as a number of Victorian houses, this peaceful suburb has a peaceful, 'old town' feel. There are plenty of old-fashioned cafes and small shops to explore, as well as more recently opened trendy restaurants.