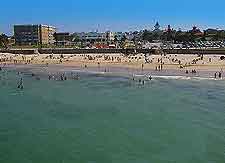 Port Elizabeth's main tourist attractions, particularly those associated with its settler heritage, can be visited as part of a self-guided walk. Information on the walk is available from the Tourist Information Centre.

Other more up-to-date attractions are also there for tourists to enjoy, including theatres, wild animal parks and entertainment complexes. In short, it's worth stopping off to explore all that Port Elizabeth has to offer. 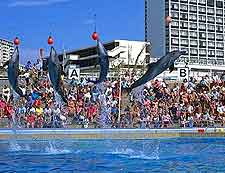 Address: Beach Road, Humewood, Port Elizabeth, South Africa, ZA
Tel: +27 041 584 0650
The Bayworld complex is one of Port Elizabeth's biggest tourist attractions. There is a museum with some unusual cultural and natural history exhibits, including a giant reconstructed dinosaur, a huge whale skeleton and a replica of the Dias Cross and cannon lifted from a shipwrecked Portuguese galleon. The Oceanarium is a fascinating place to come face to face with marine life, from seahorses to sharks. Keep a look out for dolphin and seal shows, which take place every day. In the Snake Park, there's a chance to get close to some rare species of reptiles and crocodiles in their landscaped enclosures.
Open hours: daily - 09:00 to 16:30
Admission: charge 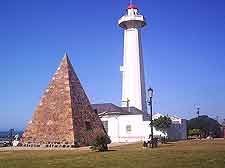 Address: Belmont Terrace, Port Elizabeth, South Africa, ZA
A visit to Port Elizabeth's Donkin Reserve is on most visitors' must-do itineraries. The Reserve is actually a vast space that was created for the public in 1820 by the British Governor of the Cape, Sir Rufane Donkin. On the site, there's a stone pyramid, erected in honour of his late wife, Elizabeth. There is also a lighthouse which, as well as being a National Monument, is also home to the city's Tourist Information Office.
Open hours: Monday to Friday - 08:00 to 16:30, Saturday and Sunday - 09:30 to 15:30
Admission: free

Address: Whites Road, Central Port Elizabeth, South Africa, ZA
Tel: +27 041 585 2908
The Port Elizabeth Opera House is reputed to be the oldest theatre in Africa. Built in 1892 on the site of a former gallows, the first play to be staged in the new theatre was 'Peter Pan'. Ever since, the Opera House has been regularly used by local drama societies, as well as touring theatre companies.
Open hours: daily, according to show programme
Admission: charge for performances 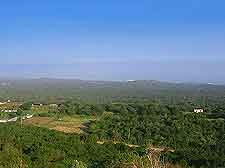 Address: Colleen Glen, Port Elizabeth, South Africa, ZA
Tel: +27 041 378 1702
Seaview offers a chance to get close to some of South Africa's big game animals. Take a visit to this self-drive park and you may see some of its star attractions, including a collection of white lions, all born at the Seaview Game and Lion Park, and hand-reared. At noon on Sunday, there is a chance to watch the lions being fed.
Open hours: daily - 09:00 to 17:00
Admission: charge 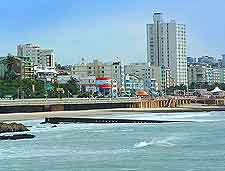 Address: Marine Drive, Port Elizabeth, South Africa, ZA
This Blue Flag beach is popular place for Port Elizabeth's holiday makers to visit. As well as having good water quality and a sandy beach, there are lifeguards on duty and plenty of parking available. There is also a promenade with cafes and easy access to shops. Humewood Beach is somewhat quieter than many other beaches in the Port Elizabeth area and offers plenty in the way of shade from the sun and shelter from the wind.
Open hours: daily
Admission: free