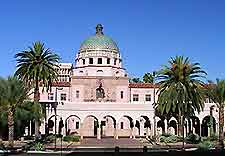 As far as landmarks and monuments go, Tucson has a bucketful, with many ancient structures and sites including the outstanding Pima County Courthouse, with its beautiful dome.

The Spanish-style St. Augustine Cathedral is the place to spend Sunday Mass and marvel at the artwork, while 'A' Mountain, or Sentinel Peak, offers grand views of Tucson city and its surroundings. 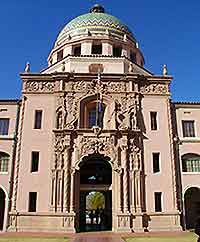 Address: 115 North Church Avenue, Tucson, Arizona AZ, USA
Built in 1927, the Pima County Courthouse is a Spanish Colonial-style building that is one of Tucson's highlights and is still in use today. The building resides on the site of the original court and part of the old walls can still be seen, while its intricate dome is unmissable. Pima County Courthouse is located on the eastern side of El Presidio Park.
Open hours: weekdays - 08:00 to 16:30, Saturday - 08:00 to 12:00
Admission: free 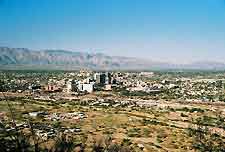 Address: Congress Street. on Sentinel Peak Road, Tucson, Arizona AZ, USA
Located to the west of downtown and originally a lookout point for early Spanish settlers, 'A' Mountain takes its name from the large 'A' that was painted on the hill by fans of the University of Arizona football team in order to celebrate a victory. The sign is now in red, white and blue. Views of Tucson from the top of the hill are spectacular day or night and there is a 19th-century historic house located at the base.
Open hours: daily
Admission: free

Address: 151 South Granada Avenue, Tucson, Arizona AZ, USA
Tel: +1 520 622 0956
Standing in the Convention Center building near the music hall, the Sosa-Carillo-Fremont House is a mid-19th-century adobe residence. One of Tucson's oldest landmarks, the house was originally owned by the Carillo family. The house is decked out in late 19th-century styles and free tours of the house are available.
Open hours: Wednesday to Saturday - 10:00 to 16:00
Admission: free