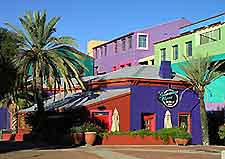 Tucson is surrounded by four sets of mountains, including the Santa Catalinas to the north, Santa Ritas to the south, Rincons to the east and the Tucson Mountains to the west. The city of Tucson is large yet well-ordered, with many interesting neighborhoods and historical districts, and is more compact than the nearby state capital of Phoenix.

Tucson lies in a valley and the bulk of the attractions here are bordered by River, Craycroft and Oracle roads as well as by 22nd Street. Most of the city follows a grid system, with the exception of the older parts of downtown Tucson and the foothills area. Here are Tucson's main locations and districts.

Tucson has many historic districts and Armory Park is the city's oldest. This historic area lies within 12th and 19th streets and Second, Third and Stone avenues. The district is undergoing constant renovations and improvements.

The Barrio Historico district in Tucson is a 19th-century Mexican historic area, with typical Mexican streets full of row-houses in the Sonoran style. This district lies between Cushing and 18th streets, Stone Avenue and the railroad tracks. Although the area is undergoing restoration, you can still find some charming restaurants and art galleries. 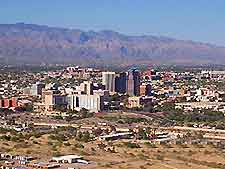 Taking in parts of Armory and El Presidio districts, Broadway Boulevard and Congress Street, Tucson's Downtown Arts District is a fairly hip area with many galleries, trendy cafés and nightspots.

In its day, the El Presidio Historic District, named after the original Spanish military post that occupied the area, was the richest district in the city of Tucson, with many large houses. The Tucson Museum resides in this attractive district and many of the original homes have been restored and converted into galleries, restaurants and bed and breakfasts.

One of Tucson's favorite areas, Fourth Avenue features a couple of annual festivals where the streets are closed to traffic and a fair is set up. Fourth Avenue runs from University Boulevard to Ninth Street and boasts great bargain shopping, especially for handicrafts and used clothing. The area also houses numerous restaurants and bars.

The Foothills of Tucson is the city's most affluent neighborhood and boasts fantastic services, attractions and panoramas. Located in the north of the city, Foothills is known for its upscale shopping malls and golf courses, a result of being the location of much of Tucson's wealthier residents.