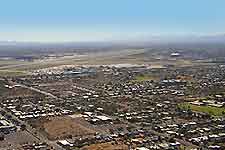 Many visitors to this part of Arizona arrive by air at nearby Tucson International Airport (TUS). With around four million arrivals and departures each year at Tucson Airport, major airlines include AeroCalifornia, Aerolitoral, Alaska, American Airlines, Continental, Delta, Northwest Airlines, Southwest Airlines and United Airlines.

This busy transport hub provides air travel to many large airports throughout North America, and also to a number of other international destinations, including Europe.

7250 South Tucson Boulevard, Tucson, Arizona AZ, 85756, USA
Tel: +1 520 573 8100
Tucson Airport is situated just 10 miles / 16 km to the south of the city, next to the suburbs of Littletown and Summit, where it offers a number of popular ground transportation options. Close by are the Interstates of I-10 and I-19, with the I-10 connecting popular destinations such as Avondale, Buckeye, Casa Grande, Chandler, Glendale, Mesa, Phoenix and Scottsdale, to the northwest.

Tucson Airport contains just one main terminal building, with three floors, and an international building with two concourse areas, the West Concourse and the East Concourse. The ground floor is the baggage level, the second floor is the ticketing level, and level three features conference rooms and restaurants.

Tucson city center is easy to reach by car from the airport and the journey lasts approximately 15 minutes, when traffic levels are favorable. The route is well-signposted and major roads and highways close by include the Tucson Boulevard, the Kino Parkway, Campbell Avenue, Kolb Road and Palo Verde.

Operated by Arizona Stagecoach, shared-shuttle buses are a particularly popular and inexpensive method of ground transportation at the Tucson Airport. A shuttle bus reservation desk can be found close to the main baggage reclaim area, with popular destinations including prominent hotels and resorts, as well as the University of Arizona on the East Speedway Boulevard. Further buses are operated by Sun Tran, which is Tucson's public bus service. These depart from the airport every hour each day.

Tucson Airport is served by three main taxi companies, AAA Airport Taxis, Allstate Taxi Cabs and Yellow Cabs. The main taxi rank is situated on the lower level, outside of the terminal building.