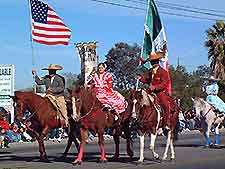 Tucson is famed for its southwestern charm and there are numerous arts and crafts festivals and concerts throughout the year.

The Cinco de May is a particularly popular event in Tucson and is held all over the southwest, featuring much frivolity, while the various rodeo and sporting events provide fun for the whole family. Below is a list of Tucson's most popular annual festivals, events and things to do.