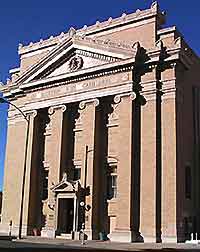 Historical chapels, religious buildings, Roman Catholic buildings and numerous churches abound in the Tucson area. St. Augustine Cathedral is Tucson's most significant place of worship and was built in the latter part of the 19th century, opening its doors in 1896. 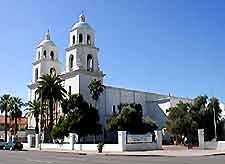 Address: 192 South Stone Avenue, Tucson, Arizona AZ, 85701, USA
Tel: +1 520 623 6351
The St. Augustine Cathedral is a vast Roman Catholic building, in the heart of downtown Tucson and was originally modeled on the Cathedral of Queretaro in Mexico. Dating back to the end of the 19th century, attractions at Tucson's St. Augustine Cathedral include a cavernous interior, a large dome and Sunday services in both English and Spanish. The artwork inside the building resembles desert scenes, with carvings of yucca and cacti, while the striking exterior is in typical beige and white Spanish Colonial style. The Sunday Mariachi Mass is a must-see for those so inclined.
Open hours: Monday to Friday - 07:00 to 18:30
Admission: free

Address: 5020 Fort. Lowell Road, Tucson, Arizona AZ, 85715, USA
Tel: +1 520 624 1817
The Chapel of San Pedro was built almost 100 years ago by immigrants from Mexico. Over the years the chapel has been renovated and in the 1930s was completely rebuilt, after severe tornado damage.
Open hours: daily - dawn to dusk
Admission: free 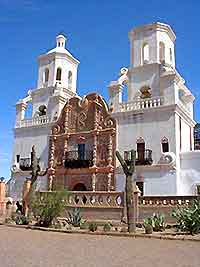 Address: 1950 West San Xavier Road, Tucson, Arizona AZ, 85746, USA
Tel: +1 520 294 2624
Tucson's Mission San Xavier del Bac is one of the area's most important landmarks, dating back to the early 1700s, when it was originally founded by a Spanish missionary. Featuring stylish architecture, other highlights at the Mission San Xavier del Bac include religious festivals and nearby attractions. San Xavier is the oldest Catholic church in the US and the present day structure has a mixture of architectural themes including Baroque, Moorish and Spanish styles. The building looks impressive both from the outside and inside, set as it is against the stark desert and with a wealth of paintings and carvings decorating its interior. Mass is held here every Sunday and there are several shops nearby selling wares made by the Tohono O'odham tribe.
Open hours: daily - 08:00 to 18:00 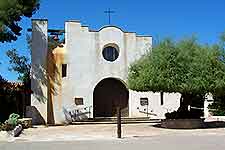 St. Phillip's in the Hills