As a large and busy city, tourism is an important part of Belo Horizonte and the city comes with a selection of popular tourist attractions. A number of these are based around the shoreline of the artificial Pampulha Lagoon, while further attractions are to be found around the centrally located Praca da Liberdade (Freedom Square) and the French-inspired circular Praca Raul Soares (Raul Soares Square).

A reliable attraction for all the family and currently attracting more than one million visitors each year, the sizeable Belo Horizonte Zoo dates back to the late 1950s, although is now part of the more recently created Botanic Foundation Natural Reserve, which was established in 1991. There are many further parks sited in Belo Horizonte, such as the Parque Municipal Américo Renné Giannetti (Municipal Park), the Parque Municipal das Mangabeiras (Mangabeiras Park) and the Mata do Jambreiro (Jambreiro Forest).

Address: Belo Horizonte, Minas Gerais, Brazil, BR
A large lagoon located on the south-westerly side of Belo Horizonte, the Pampulha is completely man-made, although is very natural in its appearance. Many local attractions surround the Pampulha Lagoon, such as the Mineirao Stadium, the Igreja de Sao Francisco de Assis and the campus of the Universidade Federal de Minas Gerais - UFMG. This giant pond was constructed in 1940 and has since become an integral part of the city, providing an essential recreational space regularly frequented by locals. If you are a keen jogger on holiday, then this is certainly the place to come for a run. Of note, is it here where the annual 'Volta da Pampulha' running race takes place.
Open hours: daily
Admission: free

Address: Avenida Afonso Pena, Belo Horizonte, Minas Gerais, Brazil, BR
Tel: +55 031 3224 8348
Serving as something of an oasis in the heart of downtown Belo Horizonte, the Parque Municipal Américo Renné Giannetti was strongly influenced by French design when it was originally landscaped in the mid-1890s. The park covers just over 44 acres / 18 hectares and features a group of small lagoons, where families enjoy hiring boats and feeding the friendly ducks. Revamped in 1992 and now home to the Casa Maluca and the Casa dos Pneus children's attractions, as well as a popular mini amusement park and several aviaries, the Parque Municipal Américo Renné Giannetti is also where you will find the Teatro Francisco Nunes.
Open hours: daily
Admission: free

Address: Avenida Brasil / Rua Goncaives Dias, Praca da Liberdade, Belo Horizonte, Minas Gerais, Brazil, BR
A beautiful centrally located square surrounded by characterful 19th-century buildings and mature palm trees, the Praca da Liberdade was designed to be a central part of the administration of the state and is bounded by both the Avenida Brasil and the Rua Goncaives Dias. Amongst the main building on the plaza are the both the Biblioteca Publica (Public Library) and the Palacio da Liberdade (Palace of Liberty / Freedom). Regular markets take place in the square each week, between Thursday and Sunday.
Open hours: daily
Admission: free

Address: Belo Horizonte, Minas Gerais, Brazil, BR
An enormous nature reserve encompassing some 2,250 acres / 910 hectares, the Mata do Jambreiro is the perfect place to come and spot local wildlife and is located approximately 20 km / 12 miles from the city. The Jambreiro Forest is said to be home to more than 150 different species of birds alone, together with a selection of mammals and other indigenous creatures, such as wild guinea pigs, monkeys and anteaters, which can often be spotted as you walk along the trails to the main vantage points.
Open hours: daily
Admission: free

Address: Belo Horizonte, Minas Gerais, Brazil, BR
Located on the south-easterly outskirts of the city and alongside the Serra do Curral suburb, the sprawling Parque Municipal das Mangabeiras covers just under 340 acres / 138 hectares, which makes it rank amongst the biggest urban parks in the whole of Brazil. Brimming with native Brazilian flora and fauna, Mangabeiras Park is full of exotic birds, as well as some towering anthills and endless picnic spots. There is also a popular open-air theatre, where regular performances are staged each Sunday. The Parque Municipal das Mangabeiras is each to reach from central Belo Horizonte, being well connected by frequent buses.
Open hours: daily
Admission: free

Address: Avenida Otacilio Negrao de Lima 8000, Belo Horizonte, Minas Gerais, Brazil, BR
Tel: +55 031 3277 7100
The Fundacao Botanica Jardim Zoológico is set on a site previously earmarked for a golf course and showcases a variety of different animals, which now number more than 1,250 and include species of mammals, birds and reptiles, both from Brazil and throughout the world. The friendly toucans are always favourites of visitors, while the botanical gardens and greenhouse provide something for those with green fingers.
Open hours: daily
Admission: charge

Address: Avenida Antonio Abrahao Caram 1001, Belo Horizonte, Minas Gerais, Brazil, BR
Tel: +55 031 3499 1100
One of the largest and most impressive soccer stadiums in existence, anywhere in the world, the Estádio Governador Magalhaes Pinto was completed in 1965 after being partly funded by the sale of lottery tickets. Bordered by the Avenida Antonio Abrahao Caram, the Avenida Coronel Oscar Paschoal and the Avenida Presidente Carlos Luz, Belo's stadium is currently capable of seating more than 75,000 and has recently been renovated for the FIFA World Cup of 2014. The Mineirao Stadium has hosted many important football matches in years gone by, with the national team of Brazil regularly playing here. Also deserving of a mention is the smaller and slightly older Estádio Independencia (Estádio Raimundo Sampaio), which is Belo Horizonte's number two football stadium and is located on the south-easterly side of the city, between the Rua Pitangui and the Rua Ismenia Tunis.
Open hours: hours vary according to event / football match
Admission: charge, discounts for children 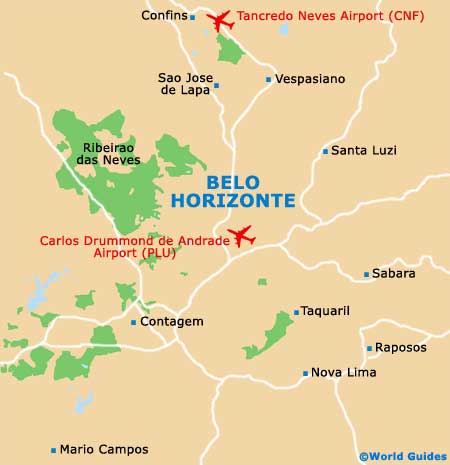