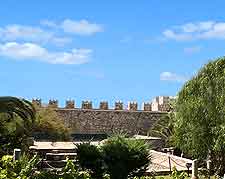 One of the top travel destinations on the Turkish Riviera is Marmaris, a tourist resort and port town with a long and colourful past. At the beginning of its history, Marmaris was known as Physkos, a Carian settlement.

Today, the trading ships have been swapped out for posh yachts and little remains of this traditional fishing village that has been around for more than 2,500 years. The picturesque harbour, however, remains the big draw and attracts thousands of leisure boaters each season to its multiple marinas.

Though it is widely accepted that tribal groups had been living around Marmaris as far back as 3400 BC, the recorded history of Marmaris only gets started in the 6th century BC, when a hilltop settlement called Physkos Asarkale was founded atop Asar hill. 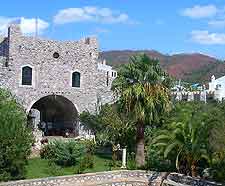 The village was part of the Carian kingdom that thrived along the Turkish coast during this era. Physkos Asarkale was considered to be an especially important trading port in Caria and remains of the first city walls can still be seen atop Asar hill, north of modern-day Marmaris.

Alexander the Great Comes to Town

At the height of their empire, the Carians used Physkos as one of their main strategic harbours. When Alexander the Great began his campaign to rule the Hellenistic World (around 330 BC), the Carian kingdom was one of his first targets. The castle at Physkos was no match for Alexander, who easily took the small town and its useful harbour. He repaired the hilltop castle and stationed several hundred soldiers there to protect his new territory. 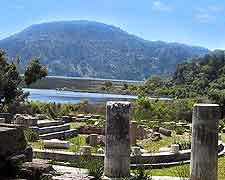 The next great chapter in the history of Marmaris didn't occur until nearly two millennia later. As the Ottoman Empire began its meteoric rise in Anatolia in the middle of the 15th century, Suleiman the Magnificent made Physkos a key coastal component of his realm.

The sultan changed the town's name to Mimaras and completely revamped the castle in the early 1520s, in preparation for an assault on Rhodes and its Christian Crusaders. Mimaras was subsequently used as a major base for military excursions of the Ottoman navy in the area. 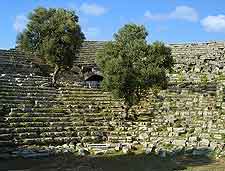 After the conquest of the Crusaders in Rhodes, Suleiman the Magnificent established a caravanserai (an inn centred around a courtyard, where traders could rest) along the road between the castle and the harbour in the year of 1545. Although this trading outpost is now a tourist spot in Marmaris, selling souvenirs and food, other historic monuments from the Ottoman era remain in tact.

The Tomb of Sariana, on the north-eastern edge of the city, honours the woman who assisted the Ottoman troops during their Rhodes campaign. The Aqueduct, the Tashan and the Ibrahimaga Mosque are other architectural landmarks that clearly display the power of the sultan's reign. 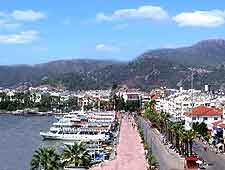 Marmaris made another important appearance in the history books in 1798, when Lord Nelson and his fleet took shelter in the city's harbour. Nelson was heading to Egypt to battle Napoleon's Mediterranean fleet - a campaign which Nelson won.

In the modern era, Marmaris has emerged as one of Turkey's most popular wintering spots for tourists. Its marinas are particularly popular with yachters, who fill the city during the pleasant winter months. Marmaris has a thriving resort scene with all the amenities expected, but still offers visitors an excellent insight into its rich heritage. The restored castle is particularly notable and has since been converted to a museum and exhibition hall.