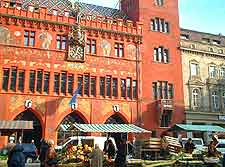 A number of truly exceptional festivals take place during the yearly calendar of Basel, such as the Fasnacht carnival at the end of February, Baselworld in April, and ArtBasel in late May or at the beginning of June. These are amongst the biggest things to do in Basel, although do bear in mind that much of the accommodation quickly becomes fully booked when these events take place.

Other notable festivals to look out for include the Viper International Film, Video and New Media Festival in March, the Stimmen in June and July, and the Autumn Fair in October. Sports fans will always enjoy watching the City Marathon (Migros Basler Marathontage), while for a spot of culture, the Musical Theatre Basel on the central Erlenstrasse regularly stages many popular musicals, theatrical events and grand productions, seating audiences of just over 1,500 people.