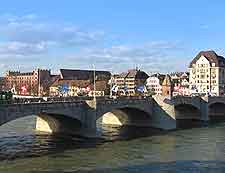 Filled with history and surrounded by beautiful Swiss countryside, Basel has grown into a surprisingly large city and features three main districts, along with further residential areas. These three regions are known as the Old Town (Vieille Ville), Greater Basel (Grossbasel) and Little Basel (Kleinbasel), although the neighbourhood of the Bahnhofsareal, next to the railway station, also deserves a mention.

The Old Town district comprises a small number of hills, the highest of which is home to the Münster Cathedral, which dominates the Münsterberg area with its two tall towers and red sandstone architecture. However, many of Basel's most appealing sights and locations are also to be found within Grossbasel, where cruises down the River Rhine come highly recommended.


Little Basel is perhaps best known locally by the Swiss as the Kleinbasel and is home to a thriving Turkish community. Kleinbasel is located of the northern side of the Rhine, opposite Grossbasel, being separated by the river itself. 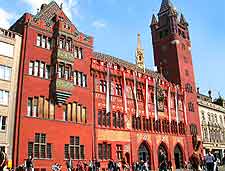 Old Town Basel, or Vieille Ville as it is referred to by the Swiss, is where it all began and is perhaps the most appealing part of the city. Apart from the Münster cathedral, another notable landmarks within the Vieille Ville is the Town Hall (Rathaus), around which you will discover a wealth of dining opportunities.

Close to the Town Hall, the Münsterplatz is an important public square and flanked by many period buildings. Other highlights within the district of the Old Town include the St. Alban's neighbourhood, which has become known for its many restaurants and cultural attractions. The Basel Art Hall (Kunsthalle Basel) on the Steinenberg is a particular highlight and boasts an extensive private collection of paintings, both classical and modern in style.

Located on the southern side of the River Rhine and known to visitors as either Greater Basel or Grossbasel, this part of the city is especially historic and features many celebrated 14th-century streets and cultural attractions. Grossbasel is actually the original site of the imperial city and is connected to the neighbouring Kleinbasel by a series of large bridges, such as the Johanniter Brücke and the Mittlere Brücke, and many regular ferries.

Many tourists come to the Kleinbasel to shop for souvenirs, to visit the Rosentalanlage fairground (close to the Baden train station) or to enjoy one of the many attractions at the trendy Kaserne Basel complex, which comprises a theatre, concert hall, restaurant and sports facilities. In early September each year, the Basel City Marathon starts at the Messeturm in this district, with the finishing line some 26 miles / 42 km later in Grossbasel.

Surrounding the city's main train station, the district of Bahnhofsareal contains a large selection of accommodation, in the form of inexpensive chain hotels. The train station itself has become an attraction in its own right and contains a number of popular shops and cafes, which tend to stay open until late most nights. If you arrive early and are waiting for a train, there is plenty to keep you occupied and entertained within the Bahnhofsareal area.