Getting Around, Barcelona Travel, Transport and Car Rental 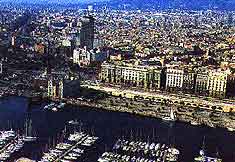 Barcelona is a relatively easy city to travel around. The centre is quite compact and most of the sights are within walking distance of one another. Much of Barcelona is pedestrianised and if you are in the city centre there is an excellent bus network and local railway. Alternatively, if you prefer to be driven around there are plenty of taxis in Barcelona.

Car hire in Barcelona suits day trippers looking to explore the surrounding area, although getting around the city itself is easiest by using the Metro trains or official black and yellow taxis.

Barcelona is served by one of Spain's busiest airports, the efficient Barcelona El Prat Airport (BCN).

A car is not really necessary to get around Barcelona, but you may wish to rent one when exploring sites outside of the city. Most major roads are in good condition and the traffic is not usually bad, although it can be hectic in cities during peak hours. Hotel parking is a good option and some central hotels offer this facility, although car parking is more common in hotels on the outskirts of Barcelona. Most foreign driving licenses are accepted in Barcelona and these include Europe, USA and Canada. In Spain, cars drive on the right-hand side of the road.

The official Barcelona taxis are black and yellow, with a green light on the roof to indicate when they are available. They are relatively inexpensive, plentiful and most convenient, particularly late at night. Most Barcelona taxis take a maximum of four passengers and charge extra for baggage and on public holidays.

Barcelona has an efficient commuter train line known as the Ferrocarrils de la Generalitat de Catalunya (FGC), with main stations located at Placa de Catalunya and also at Placa d'Espanya. The Barcelona train service is relatively cheap and very convenient for travelling outside Barcelona, to nearby towns. Tickets can be purchased at the Barcelona train stations and it is advisable not to leave this until the last minutes as the ticket windows can often have long queues.

The Barcelona Metro underground trains provide the quickest and easiest way to travel around the city of Barcelona and there are five different lines. Entrances are clearly marked with a red diamond sign
Open hours: Monday to Thursday - 05:00 to 23:00, Friday and Saturday - 05:00 to 02:00, Sunday - 06:00 to midnight

Buses provide a convenient way to travel around Barcelona and the surrounding area. It is much easy to understand the Barcelona bus routes if you have a copy of the transport map, available at tourist information offices. The Barcelona bus routes are all colour coded and most buses operate daily, from around 05:00 to 22:30, although some lines finish earlier or run later. Nightbuses run from 10:00 to 04:00.