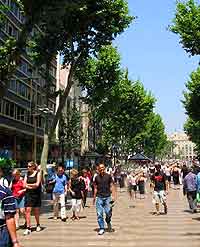 Barcelona is without doubt one of the world's most stylish cities in all aspects and there are a large number of fashion boutiques, antique shops and art galleries in the city. With the exception of large department stores, most shops in Barcelona open Monday to Saturday and close between 13:30 to 16:30, staying open until 20:00, or even later.

Due to the general low cost of living in Spain, Barcelona shopping tends to offer excellent value for money. This is particularly true reguarding purchases in the annual sales that follow the main fashion seasons - mid-January to February and the July to August. Designer names in Barcelona include Calvin Klein, Girgio Armani, Jean Pierra Bua, Gucci and Versace, to name but a few.

The best Barcelona shopping areas are in and around the old streets off the upper part of the Ramblas and the area around the Placa fr Catalunya, in the Eixample, along Passeig de Gracia and further north, along streets such as c/Muntaner, c/de Balmes, Avenida Diagonal and Via Augusta.


There are many shops in Barcelona selling souvenirs and these include ceramics, which are sold in the streets around the cathedral, leather goods, Spanish flamenco music and food from the city's many delicatessens. Some of the best gifts can be purchased in the shops of Barcelona's museums, where you will find many reasonably price souvenirs.

El Corte Inglés
Address: Pl de Catalunya 14, Avda Diagonal 617, Barcelona, Spain
The El Corte Inglés is Barcelona's largest department store and is a popular place to shop for both locals and visitors to the city.
Open hours: Monday to Saturday - 10:00 to 21:30