The most densely populated city within the autonomous community of Catalonia, Barcelona stands in north-eastern Spain, where it is the regional capital. Apart from Barcelona, there are three additional provinces based in Catalonia, namely Girona, Lleida and also Tarragona.

The borders of Barcelona are clearly defined, with the Mediterranean Sea edging the easterly coast. Both Andorra and France lie directly to the north, while the Valencian Community edges the southern boundary and Aragon is to be found to the west.

Many of the principal streets in Barcelona either run parallel or at right-angles to the coastline, with La Rambla being a major tree-lined thoroughfare, stretching for some 1.25 km / 0.8 miles and heading in a north-westerly direction, connecting the Placa de Catalunya and the L'Eixample area with the Old Harbour (Port Vell).

Packed with character and appeal is the Old City (Ciutat Vella) of Barcelona, where a wealth of hotels, eateries, bars and attractions are often hidden within a labyrinth of winding alleyways and streets, of La Rambla. The Gothic Quarter (Barri Gotic) resides on the south-eastern side of La Rambla.

Visitors will be pleased to learn the tourist offices in Barcelona offer plenty of free maps of the city and its public transport. Maps are essential if you are intending to explore Barcelona on foot, although if you stay close to La Rambla, you will be less likely to lose your bearings. 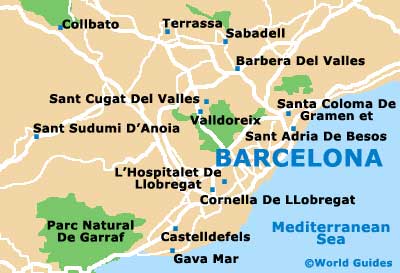