The majority of the most noteworthy landmarks in Barcelona are certainly of a historical nature and often built for past Expos or other important events, although are still quite varied. For fine traditional architecture and a real appearance of grandeur, many tourists take a stroll to the giant Arc de Triomf, to have their photograph taken standing at the base for scale.

Alternatively, head to the Tibidabo mountain, where you can either walk to the top, drive or ride on the old funicular railway, enjoying the breathtaking panoramas of Barcelona as you gain altitude. After the sun has set, tourists often flock to the Magic Fountain of Montjuic, where the water glows with coloured lights and dances around to music. 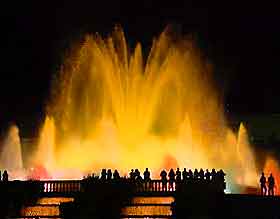 Address: Avenida Maria Cristina, Barcelona, 08004, Spain
Very much something for the tourists, the Magic Fountain of Montjuic appears much more youthful than its years, being created for the International Exposition of 1929 and inspired by an earlier version within Ciutadella Park. The fountain stands at the far end of the Avinguda de la Reina Maria Cristina, close to the Placa d'Espanya and next to the Avinguda de Rius i Taulet, where it is really best appreciated at night, since the multiple water jets are illuminated in a dramatic fashion. The 1980s saw the arrival of a musical accompaniment, with shows taking place each Friday and Saturday between October and April, from 07:00 until 08:30.

Address: Avenida Luis Companys, Barcelona, 08002, Spain
An iconic and historic structure in Barcelona, the Arc de Triomf is a giant archway of impressive proportions, being constructed for the successful Expo World Fair of 1988 (Exposición Universal), together with the tall Columbus Monument on La Rambla. Built using distinctive red bricks from that period, the arch is adorned with much ornamentation and a detailed frieze, being crowned by a coat of arms depicting the provinces of Spain. 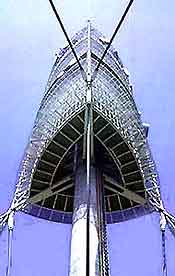 Address: Collserola, Barcelona, Spain
Tel: +34 (0)93 406 9354
Located atop the Tibidabo mountain, the Torre de Collserola is an eye-catching telecommunications tower standing just under 290 metres / 951 feet in height. The tower really is very hard to miss and many people come here each day to enjoy the views from its observation deck, although it should be said that the views from the bottom are really very impressive anyway, due to its elevated setting. The Torre de Collserola was erected in 1991, partly as a landmark for the Olympic Games the following year.
Open hours: Monday to Friday - 11:00 to 13:30 and 15:30 to 18:00, Saturday and Sunday - 11:00 to 18:00
Admission: charge

Address: Placa del Tibidabo, Barcelona, Spain
Measuring in at just over 510 metres / 1,673 feet in height, the Tibidabo serves as the highest peak within the mountain range known as the Serra de Collserola. There is much to see on the mountain, although it is the views of the Barcelona cityscape and the surrounding coastline that are the big draw here, and a steep funicular railway has been on hand to transport visitors up to the very top since 1901, departing from the Placa del Doctor Andreu. When you reach the top you will find the sizeable Parc d'Atraccions theme park and its funfair-style rides, as well as some landscaped gardens, a grand Roman Catholic church named the Temple Expiatori del Sagrat Cor, and the Museum of Automatons, where mechanical toys and slot machines from the past are displayed within an old theatre.