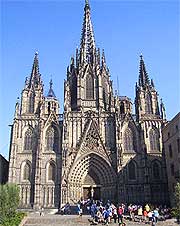 While the capital of Catalonia boasts a very long history - covering occupation to independence and a golden age, and retains many ancient reminders, it is also thoroughly modernised and appeals to all types of visitor.

The most attractive historical part of Barcelona is the Old Town, or Barri Gotic.

The Phoenicians and Carthaginians built a port 2,500 years ago and named it Tarraco. Trade boomed and it quickly grew, although the Romans, as they typically did, besieged it in the 1st century (BC). They built the city up with obligatory wall to keep out the Germans and French, parts of which remain in the Gothic Quarter (Old Town).


The Visigoths occupied Barcelona in the 5th century - along with parts of southern France, after the collapse of the Roman Empire, renaming it Barcinona. For a time is served as the capital for all of Hispania, and was later to fall into the hands of Arabic moors along with most of the Iberian peninsula. The most well-known occupation during the continued warring and invasions over the centuries was the Reconquest, or Spanish Mark.

As far as the region of Catalan as an entity is concerned, the Count of Barcelona, Wilfred the Hairy, saw to it through a hereditary system of succession. By the middle of the 12th century it was a powerful state under the Aragon Dynasty, which ruled much of the Western Mediterranean until the Castillian union of Ferdinand and Isabel ascended to power in the region, ruling from Madrid. However, by now the Catalan region and Barcelona had developed its own language and identity, becoming a dominant force. 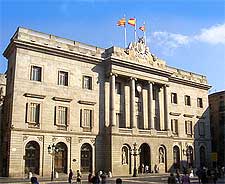 The very best of Barcelona's attractions are from the 19th century onwards, mainly coming by way of master architect Antonio Gaudi. Wherever you look you will happen upon his works, from the lofty heights of the unfinished La Sagrada Familia cathedral to dreamy Parc Güell park, and the elaborate Casa Batlló and La Pedrera mansions.

Culture-vultures will take to the Old Town, which is right alongside the busy Las Ramblas and is an attractive traffic-free area of tight cobbled alleys, stunning squares and impressive townhouses. The Plaza Real in particular has many fine old buildings, including street lamps actually designed by Gaudi himself. Barcelona Cathedral also resides in the area. 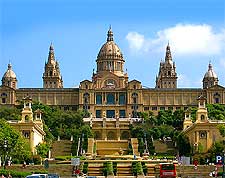 WWII and the Olympics

The Spanish Civil War and WWII had little impact on Barcelona and it recovered quickly. Catalonia gained autonomy in 1979, not long after General Franco died, after which Barcelona prospered so much that it was seen to be worthy enough to stage the Olympic Games in 1992.

The Olympics saw a city-wide beautification program, where old neighbourhoods, parks and museums were revitalised, along with the building of new roads and a modern transport infrastructure. Barcelona is today extremely proud of its heritage, although you won't find any bullfighting (a typically Spanish activity) here!

Quality museums where visitors can learn more about the past of Barcelona include the Natural History Museum in the Parc de la Ciutadella, and the City History Museum in Plaça del Rei. The latter delves right back into the city's past, while others focus on the arts and Gaudi.