While there are numerous historical churches scattered around the city of Barcelona, it is without question the Basilica i Temple Expiatori de la Sagrada Familia that steals the show.

This sizeable Roman Catholic church was designed by the hands of accomplished Catalan architect and modernism figurehead Antoni Gaudi and now ranks as a UNESCO World Heritage Site, even though the structure is actually incomplete and was never finished in its entirety.

Serving as the seat of the Barcelona Archbishop, the Cathedral of the Holy Cross and St. Eulalia is another striking edifice. This cathedral was built between the years of 1298 and 1460, on the site of a historic Visigothic chapel. The main neo-Gothic facade was added some years later in 1870, being based upon an original 1408 design and boasting many intricate features. In particular, the roof is known for its innumerable gargoyles, which comprise a series of mythical creatures and animals. 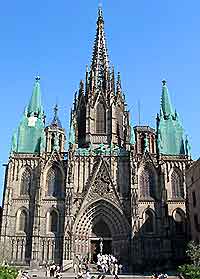 Address: Pla Seu, 3, 08002, Barcelona, Spain
Tel: +34 (0)93 315 1554
Dedicated to Eulali, a patron saint of the city, the Cathedral of Barcelona is richly decorated and a truly unique sight. The interior is vast and full of original features. This is actually one of the few churches in the city not to be damaged in civil wars.

With chapels, stunning Gothic architecture and many interesting tombs, you are also able to visit the roof via either steps or a lift. Interestingly, the cloister is called home by some 13 white geese, who live within the 'Font de les Oques' (Well of the Geese). Major renovation work commenced in 1968 and lasted just over four years.

Address: Placa de la Catedral, Girona, Spain
Situated just over an hour to the north-east of Barcelona, Girona Cathedral is a wonderful church with many interesting features, including a fine baroque facade. Much of the building has been altered over the centuries and there is also a museum with many historic exhibits. 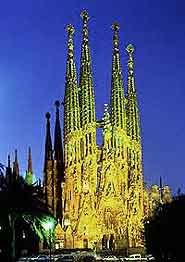 Address: Carrer de Mallorca, Barcelona, Spain
One of Barcelona's principal tourist attractions, the Sagrada Familia is quite magnificent. Its eight spires tower high into the sky, although no less than 18 spires were originally conceived by Gaudi. This medieval cathedral was never quite finished and the topmost tower should actually be even taller. Highlights include a crypt, museum and many splendid sculptures - look out for the stone tortoises residing at the base of some columns. Guided tours are also available and these come highly recommended.
Open hours: April to August - 09:00 to 08:00, March and September to October - 09:00 to 19:00, November to February - 09:00 to 18:00
Admission: charge

Address: Placa de la Seu, Tarragona, Spain
Built between 1171 and 1331, and located a little more than an hour to the west of the city, Tarragona Cathedral is situated on the site of this Roman city's temple and combines both Gothic and Romanesque features. Highlights include a beautiful cloister and some particularly detailed woodcarvings. The interior of the cathedral is over 100 metres / 328 feet in length.

Address: Passeig del Born, Barcelona, Spain
The Santa Maria church is without doubt one of the city's finest Catalan Gothic churches. Built over 500 years ago, the interior may not be overly decorated, but this church is well proportioned and imposing. Musical concerts are staged here from time to time and these can be quite enchanting.