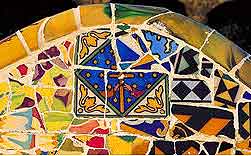 The Mediterranean port of Barcelona is ideally placed for the freshest seafood and fish. High quality Spanish fruit and vegetables are also readily available when they are at their freshest, and so restaurants in Barcelona are able to obtain a wonderful array of fresh ingredients when preparing their meals. Barcelona restaurants are graded from five 'forks' to one and the sign is usually displayed on the door of the restaurant, indicating price, facilities and service - not the actual quality of the food.

In Barcelona, the most widespread restaurants are those serving Catalan cuisine. This is generally solid and nourishing food, with a strong emphasis on meat, olive oil, garlic, fruit and salad. Fresh seafood and fish are also good options, often being served in the form of a variety of Tapas, these are bite-sized snacks that accompany drinks and they are a real part of Spanish culture and very popular in the city. The tapas bars (tascas) can become very busy and they usually have plenty of atmosphere. Tapas started in the 18th century when Carlos III asked for his wine to be covered with a plate of food, to stop the dust from getting into it - 'tapa' literally means 'lid', which is where the name comes from. These days, the most common types of tapas include snails, deep-fried squid, mushrooms, baby eels, tripe, prawns, cold potato omelette, meatballs, potato salad, olives, cheeses, cold meats and tortillas. A meal in a tapas bar or café in Barcelona is a very social way to enjoy and share a large variety of food and different tastes.


The range of international cuisine in Barcelona is increasingly due to demands and choices include good pizzas, Indian and Pakistani food, Middle Eastern, Japanese, Chinese and Thai cuisine, although the best restaurants in Barcelona tend to be those serving more traditional food. There are also an increasing number of international chain restaurants opening in Barcelona and these are most common around the Port Olimpic and more touristy areas. These many not have the atmosphere of a typical restaurant in Barcelona, but they do have the advantage of opening outside the normal eating hours.

Spaniards tend to eat rather late and Barcelona is no exception to this. Restaurants in Barcelona usually open between 13:00 to 16:00 for lunch and then 20:00 to 23:00 or later for evening meals. Many restaurants in Barcelona also close on Sundays or Mondays and on public holidays in August, so it is often worth checking opening hours first. At very popular restaurants it is generally worth reserving a table in advance - either by telephone or in person.

'Menjador' are cheap eateries that are usually found at the back of bars. These are essentially worker's cafés and certainly do provide value for money, with large portions. Meals are only served at lunchtimes, rather than in the evenings. Cafés and bars also provide good value for budget dining in Barcelona and the food normally comes in the form of a combined plate (plato combinado) which consists of food such as egg, steak or chicken and chips or calamares and salad, usually with bread and sometimes drinks are included in the price.

Vegetarian meals are more limited in Barcelona restaurants, although many do serve provide some options, such as vegan salads, aubergine and peppers or a simple Spanish omelette, a real speciality of Barcelona. There is often a wider choice at the more ethnic restaurants in Barcelona.