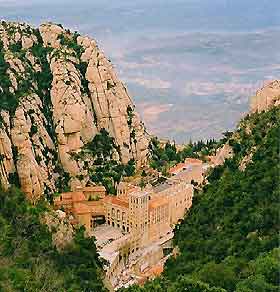 The tourism scene in Barcelona has never been so well developed and tourist attractions are certainly in plentiful supply. Walking around the city is a good way to sightsee, especially if you join an official guide-led walking tour.

Tourists will enjoy the beach-related attractions at the Platja de Sant Sebastià, on the outskirts of Barcelona, while families will also find the marine creatures at L'Aquàrium especially appealing. All ages should consider spending time at Barcelona Zoo, and you can easily while away an entire day here, exploring the grounds and animal exhibits, before perhaps heading to the Port Olimpic (Olympic Port) for an evening meal. 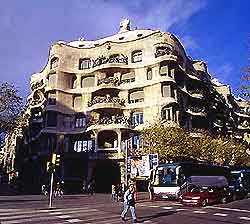 Barcelona's Casa Mila is Gaudi's unique and interesting apartment block, which features an exhibition hall and access to the roof area. It was built between 1905 and 1911 and is commonly known as 'La Pedrera' (The Rock Pile).
Open hours: 10:00 to 20:00
Admission: free

Address: Passeig Maritim de la Barceloneta, Barcelona, Spain
The Platja de Sant Sebastià is the nearest beach to town, close to the La Barceloneta neighbourhood. With palm trees, lifeguard services, children's plays areas, showers and disabled services, it is on one of many excellent beaches near to the city. Barcelona has over 4 km / 2.5 miles of coastline.

Address: Moll d'Espanya, s/n, Barcelona, Spain
Tel: +34 (0)93 221 7474
This sealife aquarium is one of Barcelona's many popular tourist attractions and is housed in an unusual transparent building. With a varied collection of marine life from all over the world, including sharks, this sealife centre also includes a play area for children. The nearest train station is Drassanes.
Open hours: Monday to Friday, 09:00 to 21:00, Saturday and Sunday, 09:00 to 21:30 (opens later in the summer)
Admission: charge

Address: Parc de la Ciutadella, s/n, Barcelona, Spain
Tel: +34 (0)93 225 6780
Home to more than 7,000 animals and over 500 species, one of the star attractions in Barcelona Zoo is Snowflake, the only albino gorilla in captivity. There are also lions, tigers, tropical birds, insects, spiders and even dolphins.
Admission: charge 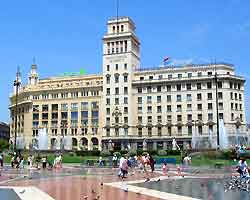 Address: Passeig de Graciam, (Ronda de Sant Pere), Barcelona, Spain
The Plaça Catalunya is Barcelona's main square and is situated in the Gothic Quarter of the city. This vast and busy square is surrounded by many large buildings and beautiful architecture. There are also two splendid sculptures in the square. The nearest train station is Catalunya.

Address: Avinguda de l'Estadi, Barcelona, Spain
The 'Olympic Ring' in Montjuïc was one of the major sites used during the 1992 Olympic games. Situated next to the Olympic Stadium (Estadi Olimpic), which now houses an exhibition centre about the Olympic games, there are a number of sporting facilities. These include the Picornell swimming pools, which are open to the public. Regular sporting events are hosted in the Palau Sant Jordi, which seats around 17,000 spectators. Anella Olimpica is easily reached by bus.

Address: Barri Gòtic, Barcelona, Spain
These two squares in Barcelona are situated next to each other in the Gothic Quarter of Barcelona. They are full of history and are surrounded by many good cafés. The lively squares lead into each other and are often home to art and food markets, as well as street performers and musicians. The nearest train stations are Liceu and Catalunya.

Address: Avenida de la Crew Coberta, Barcelona, Spain
The Plaça Espanya in Barcelona is the old gateway to the city and is situated in the L'Eixample neighbourhood. It features a large fountain that was designed by Josep Maria Jujol and inspired by Gaudi. The nearest train stop in Espanya.

Address: Barri de Olimpicos, Barcelona, Spain
Opened in 1992 for the Olympic Games, the Port Olimpic is a popular entertainment and leisure attraction. With many restaurants, bars, shops and nightclubs, Port Olimpic is situated underneath two large and impressive skyscrapers and you are able to rent speedboats around the port. Ciutadella is the nearest train stop.

Address: Les Rambles, Barcelona, Spain
The Ramblas is a popular part of the city and the Rambla de Canaletes is a walkway, with newspaper kiosks selling newspapers from all over the world. There is also a small fountain (Font de Canaletes) which has the legend that if you drink from it, you will revisit the city of Barcelona in the future.