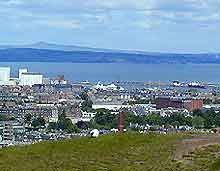 Sports are a major pastime for many locals living in Edinburgh, who both participate and enjoy watching from the sidelines as spectators. Located on Corstorphine Road, on the western side of Edinburgh and next to the Roseburn Public Park, the Murrayfield Stadium is often simply referred to as 'Murrayfield' and dates back to 1925, being the biggest in Scotland and capable of seating more than 67,000 spectators.

Standing just down the road from Edinburgh Zoo, the Murrayfield Stadium is officially a Rugby Union stadium, being home to the Scottish Rugby Union (SRU). However, many other major sporting events have taken place here over the years, including American football and association football matches, as well as the occasional concert or two.

Considerably smaller but equally important is the Meadowbank Stadium, which is located on the eastern side of Edinburgh, next to the Meadowbank Sports Center and Holyrood Park. This stadium was built to host the Commonwealth Games of 1970, hosting them again in 1986, and has an overall capacity of 16,500 spectators.

Playing regular championship basketball matches, the city's main basketball team is named the Edinburgh Rocks. Most home games take place on Sunday afternoons between September and April, from 17:00, at the Quarry basketball court at the Meadowbank Sports Centre.

Cricket is gaining popularity in Scotland and the Scottish cricket season runs from mid-April to September. The city has a number of cricket teams, playing regular summer matches at various pitches. Particularly historic is the Edinburgh Academical Cricket Club on Kinnear Road, which was founded in 1855.

Cycle racing events take place at the velodrome in the Meadowbank Sports Centre. Particular cycling highlights include the East of Scotland Grand Prix at the end of June, and the Cycle Festival Meeting held each year in the middle of August. Of note, the Meadowbank velodrome is called home by the Scottish Cyclists' Union. 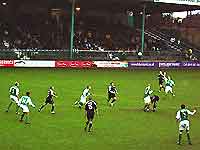 Football is one of the most popular spectator sports in Edinburgh and football matches are always well attended. Major football clubs in the area compete in the Scottish Premier League and include:

Rugby Union has a strong following in Edinburgh and the rugby season runs from September to April. The pro-team, Edinburgh Rugby (formerly the Edinburgh Reivers / Gunners) is now based at the Meadowbank Stadium, where regular matches are played. The Six Nationals Championship (February to April) and the Autumn Tets matches (November) always draw large crowds of spectators.

Curling is one of the more unusual sports in Edinburgh. It gained much popularity after the 2002 Winter Olympics, when Scotland won the curling gold medal. Curling facilities are available at the Murrayfield Ice Rink.

There are numerous well-equipped fitness centres all around Edinburgh, with typical weight training equipment and personal trainers, as well as aerobics, yoga and other exercise classes. Most gyms open on a daily basis, from early in the morning until late. Sports centres in the area include:

Address: 13 Riversdale Crescent, Edinburgh, EH12 5XN, Scotland, UK
Tel: +44 (0)131 337 6933
Ice skating is available at the Murrayfield Ice Rink, on the western side of the city. This is the home ground of the Edinburgh Capital ice hockey team, while the rink is also used for public ice skating and disco skating.

Rock climbing is one of the most exciting adventure sports on offer and the Meadowbank Sports Centre has a tall climbing wall constructed of brick. Other rock climbing facilities include Alien Rock, a 10-metre / 32-foot wall located in a former church in Newhaven, and also the National Rock Climbing Centre of Scotland, which is one of the largest outdoor pursuits centres in Europe and is based within a disused quarry in West Edinburgh.

Address: Biggar Road, Edinburgh, EH10 7DU, Scotland, UK
Tel: +44 (0)131 445 4433
Formerly named the Hillend Ski Centre, the Midlothian Snowsports Centre is located on the far southern side of Edinburgh and features the largest artificial ski slope in the whole of Europe, measuring a whopping 450 metres / 1,475 feet. There is also a shorter slope measuring in at 320 metres / 1,050 feet, along with a small nursery slope and a ski jumping area.

Prices at the Midlothian Snowsports Centre include the hire of boots, skis, poles and use of the chairlift, while snowboards are also available. You can enjoy spectacular views from the very top of the dry ski slopes, which stretch as far as Arthur's Seat and beyond on fine days.

The city has a number of excellent snooker halls, with full-size tables and good facilities. Snooker halls in Edinburgh include:

Recently refurbished at the cost of almost £40 million, the Royal Commonwealth Pool (RCP) stands on Dalkeith Road, on the southern side of the city, where it boasts three pools (teaching, diving and swimming).

Notable swimming pools in Edinburgh include: