If you are just visiting the city of Edinburgh for a weekend, then you will certainly need to prioritise your time well, particularly when planning a couple of days of intensive sightseeing. There are certainly more than a few noteworthy Scottish landmarks spread around the capital, both historic and more modern.

Edinburgh Castle is particularly famous and clearly visible on the skyline. In continuous use for over 1,000 years, the castle was an official Royal residence for many centuries. Located on the far south-eastern side of the city and close to Hawkhill Wood, Craigmillar Castle is another landmark of Scottish significance and is known for its strong connections with Mary, Queen of Scots.

Further important landmarks in the city include the National Monument of Scotland on Calton Hill, the Scott Monument at the Prince Street Gardens and the Palace of Holyroodhouse on Holyrood Road. Parliament House is also worth looking out for and stands on Parliament Square, close to St. Giles Cathedral, the Festival Fringe Shop and the Sheriff Court. 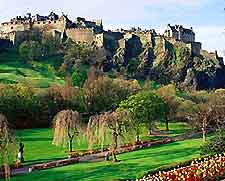 Address: Castlehill, Edinburgh, EH1 2NG, Scotland, UK
Tel: +44 (0)131 668 8800
This famous fortress stands within the Old Town area and is a well-preserved centrally located landmark. The main feature of the architecture is the curve of the massive artillery emplacement - the Half Moon Battery, which was built to protect the vulnerable eastern side. Edinburgh Castle comprises a series of attractions, including the Palace - now a popular museum, the Gatehouse - with bronze statues of Robert the Bruce and William Wallace, the Mills Mount Battery - where a famous cannon is fired daily at 13:00 (except on Sundays), the small Witches' Memorial monument - where over 300 women were burned as witches between 1479 and 1722, and some spectacular views across many different areas of the city, including Old Town, New Town, the Firth of Forth, Fife, Ramsay Gardens, Princes Street and the Pentland Hills.
Open hours: daily, April to September - 09:30 to 18:00, October to March - 09:30 to 17:00
Admission: charge, discounts available for seniors and children 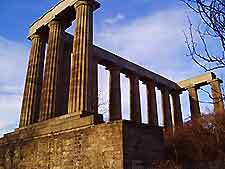 Address: Regent Road, Edinburgh, EH1 3DG, Scotland, UK
Tel: +44 (0)131 200 2000
Calton Hill is an especially historic part of the city and comes with some impressive sights, namely the Nelson Monument and the National Monument of Scotland - a sizeable reproduction of the Athens' Parthenon, which although was never completed due to lack of funding, is still impressive. The area also provides some excellent panoramic views across Edinburgh, Fife and the Firth of Forth. Calton Hill hosts the popular Beltane Festival in the summer, when many people descend here. 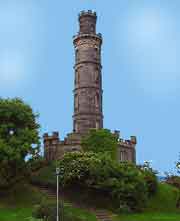 Address: Calton Hill, Regent Road, Edinburgh, EH7 5AA, Scotland, UK
Tel: +44 (0)131 556 2716
Located in the Calton area and on the south-western side of Regent Gardens, the Nelson Monument stands proudly on Calton Hill and is a memorial to Admiral Nelson's famous victory at the Battle of Trafalgar in 1805. This monument was built in 1816 and was designed in the shape of Nelson's telescope by Robert Burn in 1807. With a total of 143 steps leading to the top, the views make the steep climb more than worth the effort and it is advisable to purchase a brochure on entry, so that you can work out what parts of Edinburgh you are actually looking at.
Open hours: April to September, Monday - 13:00 to 18:00, Tuesday to Saturday - 10:00 to 18:00, October to March, Monday to Saturday - 10:00 to 15:00
Admission: charge

The Royal Mile is the oldest part of the city and marks the road running directly from Edinburgh Castle down to the Palace of Holyroodhouse. A number of important landmarks stand along this stretch and serve as a reminder of the city's historic past and important capital city status. The vast majority of shops here tend to target the lucrative tourist market and include woolen mills, craft shops and tartan clothing outlets.

Address: 100 Ocean Drive, Leith, Edinburgh, EH6 6JJ, Scotland, UK
Tel: +44 (0)131 555 5566
Queen Elizabeth II's stunning Royal Yacht Britannia soon became a serious tourist magnet when it was decommissioned in 1997, after 44 years of royal service. Attractions onboard include the Royal Apartments, the tiny cabin allocated to the admirals who captained this vast yacht, audio guided tours, interactive displays in the Visitors Centre, a café and a large themed gift shop. The famous tradition of cleaning and polishing every item daily still continues and setting foot on Britannia is rather like stepping back in time. The royal yacht is moored in the Leith area and closes an hour and a half after the last admission time, to allow ample time to see everything on offer.
Open hours: daily, April to September - 10:00 to 16:30; October to March - 10:00 to 15:30 (tickets should be booked in advance)
Admission: charge, discounts available for seniors and children 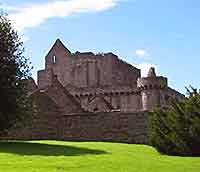 Address: on the A68 road, Edinburgh, EH16 4SY, Scotland, UK
Tel: +44 (0)131 244 3101
The medieval Craigmillar Castle is now managed by Historic Scotland and this ancient L-shaped tower house is surrounded by a later castle wall. Dating back to the 14th century, this fortress has been rebuilt, remodelled and restored over the subsequent centuries. Craigmillar was once a favourite spot for Mary, Queen of Scots, who fled here after the murder of David Rizzio in 1566, and visitors will be able to tour a number of stately apartments. Due to the large number of French people in Mary's court who took up residence in this area, the nearby district is often referred to as the city's 'Little France'.
Open hours: April to September, daily - 09:30 to 18:30; October to March, Monday to Thursday, Saturday - 09:30 to 16:30, Sunday - 14:00 to 16:30
Admission: charge, discounts available for seniors and children 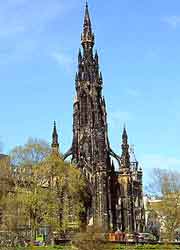 Address: Charlotte Square, Edinburgh, EH2 4DJ, Scotland, UK
Tel: +44 (0)131 553 1314
West Register House is an attractive townhouse in the New Town area of the city, being sandwiched by Randolph Place and Charlotte Square. Recently restored, this imposing building houses the popular West Search Room of the National Archive of Scotland, containing maps, plans, records of government departments and microfilm catalogues. There is also a small and interesting exhibition detailing how the geography of the region has been shaped by man over the past few centuries.
Open hours: Monday to Friday - 10:00 to 16:00
Admission: free 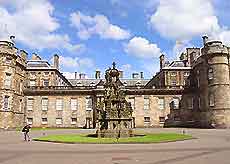 Address: Holyrood Road, Edinburgh, EH8 8AE, Scotland, UK
Tel: +44 (0)131 556 1096
Originally built by James IV, with numerous refurbishments made by subsequent monarchs, the Palace of Holyroodhouse is an important landmark in the Holyrood area of Edinburgh. The palace was regularly used by Queen Victoria when travelling to or from Balmoral and is still regularly used by the present Royal family of today. Highlights include antique furniture, tapestries, paintings, historic artefacts from several centuries and the lavish private apartment of Mary, Queen of Scots. Of particular interest is the Great Gallery, which at 45 metres / 150 feet long is full of more than 100 portraits of monarchs by Dutch Artist Jacob de Wit, commissioned by Charles II, who wished to be surrounded by representations of 2,000 year's worth of his ancestors.
Open hours: daily, April to October - 09:30 to 18:00, November to March - 09:30 to 16:30
Admission: charge, discounts available for seniors, children and groups

Address: 477B Lawnmarket, Edinburgh, EH1 2NT, Scotland, UK
Tel: +44 (0)131 226 5856
Once owned by prominent local businessman Thomas Gledstanes, this National Trust for Scotland property remains in its original 17th-century style. Gladstone's Land is a six-storey townhouse and an essential stop when touring the Old Town area of the city, with helpful guides being on hand to answer questions. Each floor was actually rented out to a different set of tenants, meaning that this house used to earn Thomas a good income.
Open hours: April to November, Monday to Saturday - 10:00 to 17:00, Sunday - 14:00 to 17:00
Admission: charge, discounts available for seniors, children, families and groups

Address: Princes Street, Edinburgh, EH1 3YT, Scotland, UK
Tel: +44 (0)131 535 1314
Designed by Robert Adam in the late 18th century, a famous Scottish architect, the General Register House took more than 30 years to complete and is called home to the National Archives of Scotland. Of interest, this is actually the oldest purpose-built repository in Europe, holding public records of government, churches, the law and many Scottish businesses. With more than 60 km / 35 miles of shelving, searching the archives for historical research purposes here is completely free of charge. The St. James Shopping Centre is close by, should you have time to spare and money to spend.
Open hours: daily - 10:00 to 16:00
Admission: free

Address: Old Town Weaving Company, 555 Castlehill, Royal Mile, Edinburgh, EH1 2NE, Scotland, UK
Tel: +44 (0)131 226 1555
Situated in the Old Town area and next to the University of Edinburgh, the Tartan Weaving Mill features an exhibition which explains the history of Scotland's famous textile. The mill itself is still working and there is also a tartan shop, with numerous kilts for sale. Just a short stroll to the west are the castle grounds, while St. Giles Cathedral lies to the east.
Open hours: Monday to Saturday - 09:00 to 17:30, Sunday - 10:00 to 17:00
Admission: charge, discounts available for seniors, children and families

Address: Lambs House, Burgess Street, Leith, Edinburgh, EH6 6RD, Scotland, UK
Tel: +44 (0)131 554 3131
Lamb's House is situated in the northerly Leith area of the city and was built in the 16th century. Now owned by the National Trust for Scotland, the house offers a wide range of activities, such as dance classes, bowling, bingo and much more besides.
Open hours: hours vary

Address: Parliament Square, Edinburgh, EH1 1RF, Scotland, UK
Tel: +44 (0)131 225 2595
Parliament House, one of the city's most important landmarks, was built in the early 17th century and previously functioned as the seat of the Scottish Government until 1707, when the Act of Union combined the Scottish and English governments. Onsite attractions include a grand hall - still used by lawyers today (from the adjoining District Court), numerous paintings and the extensive Signet Library, which is located upstairs.
Open hours: Monday to Friday - 09:00 to 17:00

Address: Royal Botanic Garden, Inverleith Row, Edinburgh, EH3 5LR, Scotland, UK
Tel: +44 (0)131 552 7171
Inverleith House resides within the New Town area and is situated in the centre of the Royal Botanic Garden. With many regular exhibitions about science, art and numerous paintings by well-known artists, this is an impressive building in its own right.
Open hours: Wednesday to Sunday - 10:00 to 17:00
Admission: free