Edinburgh is very much a city for all of the family, with many quality attractions highly suitable for children, both young and old. Especially popular is Edinburgh Zoo, which resides on the western side of the city, within the Murrayfield area, where it first opened its doors to the paying public in 1913.

Covering just over 80 acres / 32 hectares and home to more than 1,000 animals, Edinburgh Zoo's most famous inhabitants are its pair of pandas - Yang Guang and Tian Tian, who have recently been loaned from China (at the cost of more than £600,000 per year) and have greatly increased visitor numbers, being the first pandas to live in the United Kingdom for almost 20 years. 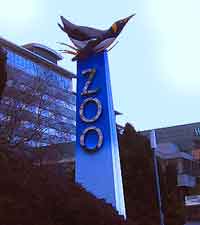 Address: Corstorphine Road, Edinburgh, EH12 6TS, Scotland, UK
Tel: +44 (0)131 334 9171
Edinburgh Zoo is the number one attraction for families visiting the city, being home to hippos, snakes, koalas, lions, monkeys, marmosets, zebras and many other exotic animals. One of the main highlights is the zoo's army of penguins, which are the world's largest group in captivity, being housed in the world's largest penguin pool, where they can be viewed swimming underwater. 'Penguin Parade' is held daily at 14:00 between March and October. Other zoological attractions include a zoo education centre where children are able to handle some of the smaller animals, such as snails, rabbits, snakes and chinchillas, as well as an open-sided trailer ride providing regular 'safari' rides, a large gift shop and a restaurant area.
Open hours: daily, April to September - 09:00 to 18:00, October to March - 09:00 to 17:00, November to February - 09:00 to 16:30
Admission: charge, discounts available for seniors, children and families 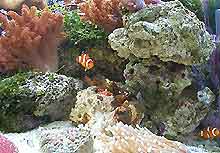 Address: Battery Quarry, Fife, KY11 1JR, Scotland, UK
Tel: +44 (0)1383 411880
Deep Sea World is roughly a 30-minute drive from Edinburgh and is an award-winning tourist attraction. Visitors are taken underneath the sea through a 71-metre / 232-foot transparent tunnel, where you have excellent views of large fish, sharks and numerous impressive sea creatures. Other highlights include a group of piranhas, regular shark feeding displays, stingrays, a rock pool where children can get a 'hands-on' experience with crabs and starfish, a café and a Sea World themed gift shop.
Open hours: March to October, daily - 10:00 to 18:00, November to February, Monday to Friday - 11:00 to 17:00, Saturday and Sunday - 10:00 to 18:00
Admission: charge, discounts available for seniors, children, families and large groups

Address: 51 Gorgie Road, Edinburgh, EH11 2LA, Scotland, UK
Tel: +44 (0)131 337 4202
Located in the Haymarket area of Edinburgh and close to the Heart of Midlothian Football Club, the idyllic Gorgie City Farm is just a ten-minute bus journey from Princes Street and contains all the farmyard favourites, and more besides. Animal attractions include goats, sheep, ponies, large tortoises and a rabbit's cuddle corner, where children are able to handle the farm's friendly rabbits. The Gorgie City Farm features an educational Discovery Centre with a number of activities available for both children and adults, such as pottery, weaving, spinning and woodwork. There is also an excellent playground area, as well as attractive vegetable, herb and wildlife gardens.
Open hours: daily - 09:30 to 16:30
Admission: free, donations suggested

Address: Dobbies Garden World, Lasswade, Midlothian, Edinburgh, EH18, Scotland, UK
Tel: +44 (0)131 663 4932
Housed at Dobbies Garden World, Butterfly and Insect World is a popular family attraction and this tropical greenhouse paradise features many colorful butterflies, hatching from their cocoons throughout the year. There are also a number of large insects, reptiles and spiders, such as tarantulas, and these can be handled by children at daily hands-on sessions.
Open hours: summer, daily - 09:30 to 17:30
Admission: charge, discounts available for seniors, children, families and large groups, children three years old and under are free

Address: Dobbies Garden World, Lasswade, Midlothian, Edinburgh, EH18 1AZ, Scotland, UK
Tel: +44 (0)131 654 1720
The Edinburgh Bird of Prey Centre is home to over 30 different species, including eagles, falcons, hawks and owls. With extensive exhibits about the characteristics and hunting habits of these birds, the centre has daily flying displays, which are held at 13:30 and 15:30 during the spring and summer months.
Open hours: daily - 11:00 to 17:00
Admission: charge, discounts available for students, children and groups

Clambers at the Royal Commonwealth Pool

Charlie Chalks and the Fun Factory

Tel: +44 (0)131 555 1570
This large and exciting children's attraction features an indoor play area attached to a pub / restaurant, with a safe, soft-play area for younger kids. Charlie Chalks and the Fun Factory is situated close to the Newhaven Heritage Museum.
Open hours: Monday, Wednesday and Friday - 10:00 to 21:00, Tuesday, Thursday and Saturday - 11:00 to 21:00
Admission: charge per 45-minute session