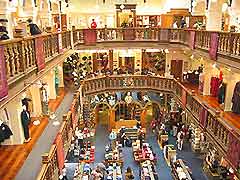 The past couple of decades have seen a real explosion in the sheer quantity and quality of restaurants in Edinburgh, with dining out enjoying a real resurgence in popularity. Coffee shops, gourmet bistros, pub grub and all manner of eateries now present themselves to tourists visiting the capital of Scotland.

The street cafe culture is thriving in Edinburgh and good simple dining choices can be found around the Festival Theatre, the Royal Botanic Gardens and the Greyfriars Kirkyard, where the Elephant House resides, on the elevated George IV Bridge thoroughfare.

The Elephant House describes itself as a 'gourmet tea and coffee house / restaurant' and interestingly, it was here where world-famous author J. K. Rowling once came to write her early Harry Potter stories, while enjoying views of Edinburgh Castle. Many loyal Harry Potter fans come here each year to see the actual place where so many pages were originally written, whilst perhaps enjoying a panini, baked potato, burger, salad or homemade pizza. 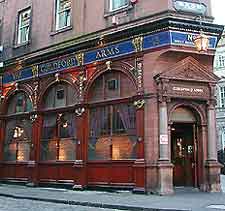 During the Edinburgh festival season, which takes place from August to September, many of the city's restaurants choose to remain open until much later and often join in the general festivities. In addition to restaurants in the capital, most public houses in Edinburgh serve food, offering either bar meals or a more formal dining area, although pubs without a relevant licence are not allowed to serve children under 16 years old.

Also worth noting, most of the city's large hotels come with excellent value restaurants, which are always open to non-residents, and many of these are frequented by local Scots. Good choices await diners in areas such as the Old Town, the New Town, Stockbridge, Carlton Hill, Broughton, Leith and Newhaven.

If you are intending to take breakfast outside of your hotel or guesthouse, then Edinburgh offers a variety of options in the city centre. Located on the High Street, the Always Sunday cafe is a reliable spot for breakfast, which is served between 08:00 and 11:30 during the week, and from 09:00 until 11:30 at the weekend. Always popular here is the morning fry up with sausage, bacon, a slice of genuine Scottish haggis, fried eggs and toast, while those looking for something a little healthier can choose between smoked salmon and scrambled eggs, fruit smoothies and pastries.

Located on Elm Row and close to Harvey Nichols, the Valvona and Crolla Caffe Bar is known for its tasty breakfasts and Sunday brunches, as well as its delicious lunchtime specials and fine wine. 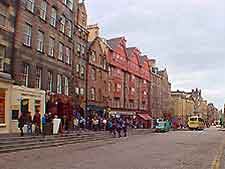 When it comes to lunchtime in Edinburgh, local restaurants compete to gain your business throughout the city centre, often opening as early as 11:30 and providing specials boards with seasonal dining options. Chinese, Thai, Italian and Mexican restaurants are amongst the top choices.

Many simply prefer to search out some hearty traditional pub grub. Situated close to Granton Harbour and alongside the Firth of Forth, the Old Chain Pier Pub offers lunchtime dining with an enviable view, with steak and chips, baguettes and seafood chowder always going down well here.

Fast-food eateries may also appeal to tourists in Edinburgh, with familiar names including the likes of the Baked Potato Shop on Cockburn Street, Domino's Pizza on Nicolson Street, KFC on Waverley Bridge, Pizza Hut on Raeburn Place and Subway on Forrest Road.

Edinburgh restaurants open for dinner at 18:00, although some do open slightly earlier, with special 'early bird' deals to entice families. For fine dining and perhaps a romantic meal, the choices are seemingly endless, and so it is often as simple as choosing somewhere close to your hotel.

A few possible suggestions in central Edinburgh include the Grain Store on Victoria Street, which is just across from the Royal Mile and specialises in Scottish produce, including beef, lamb and venison dishes. Another popular choice, the Tower Restaurant on Chambers Street is situated above the Museum of Scotland and offers rooftop dining and a fixed-price three-course menu, with rabbit fritters, sea bass and sticky date pudding.