Getting Around, Porto Travel, Transport and Car Rental

The various transport options in Porto cover almost every possible way to get around, with many tourists finding that the comprehensive metro trains are amongst the most convenient way to travel. Porto is also known for its funicular railway (Funicular dos Guindais) and this mode of transport is especially scenic, travelling up the steep hillside from the Ribeira area and departing from the Avenida Gustavo Eiffel, close to the Rua Augusto Rosa.

Porto's spreading metro network has really opened up the city and passengers use 'Andante' cards, which provide rechargeable travel according to zone. Andante cards can also be used on bus transport, tramlines and on the funicular railway.


Ferryboats are also available in Porto and link destinations such as the cities of Matosinhos and also Vila Nova de Gaia. Boat trips along the Douro River are also popular and provide an extremely popular and relaxing way to both travel and sightsee. 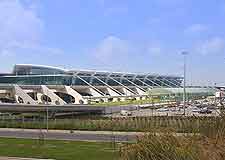 Address: Pedras Rubras, 4470 Maia, Porto, Portugal, PT
Tel: +351 229 432 400
Francisco Sa Carneiro Airport is to be found approximately 11 km / 7 miles from the city, being located on the northerly outskirts. This is the third-busiest air facility in Portugal and is linked to central Porto by a range of convenient public transport, including speedy metro trains, buses and taxis. Buses are amongst the most popular ways to travel to Francisco Sa Carneiro Airport and are run by the city's very own Aerobus company, travelling twice hourly from the Avenida dos Aliados via Boavista, between 07:00 to 19:00 each day. This journey is fairly slow and takes a minimum of 40 minutes, although the tickets are extremely cheap and just a few Euros. 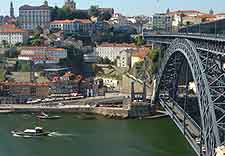 Those choosing a rental car as their main mode of transport in Porto should really avoid driving in the very city centre if at all possible, since there are many winding, narrow streets, a large number of which are one way. Heavy traffic can be commonplace in the morning and last for many hours. However, should you choose to travel outside of Porto itself, you will find that the city is well connected to many popular Portuguese destinations. The A1, A3, A4, A28 and A29 highways connect many neighbouring cities, such as Aveiro, Braga, Gondomar and Viana do Castelo. Head to the Loja da Mobilidade at the Porto tourist office for a map of all the main car parks. 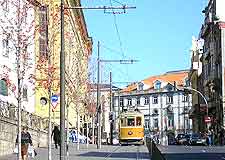 Trams were once the main method of transport in Porto for many years, although today, only three tramlines actually remain and these enjoy especially scenic routes, travelling to stops such as the riverside Massarelos, close to the Palácio Cristal. The city's trams have now been largely replaced by bus transportation, with the most prominent hubs including the Cordoaria, the Praça Almeida Garret and the Praça da Liberade, located at the southerly side of the Avenida dos Aliados. Bus transport in the city is cheap and popular, and operated by the Sociedade de Transportes Colectivos do Porto (STCP). 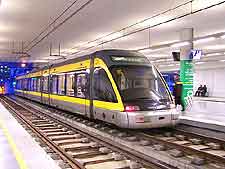 Porto's extremely modern metro network comprises both light rail and subway transport and has only been running for a matter of years, being officially opened in 2004. The central hub of the metro transport is Trindade Station, which lies on the northern side of the Avenida dos Aliados and contains five lines, operated between 06:00 to 01:00 daily and travelling to the following destinations: 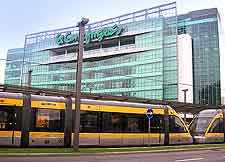 The city of Porto is actually the leading railway hub in the whole of northern Portugal and various long distance trains travel both to and from Campanha Station, which is to be found just 2 km / 1.5 miles to the east of the actual city centre itself. Regional rail transport tends to originate from the Sao Bento train station, before running through the Campanha Station. Lisbon can be reached by train transport from Porto in approximately three hours, while the municipality of Coimbra is considerably closer and just over an hour away by train. Regular suburban trains also travel through the Douro Valley and to Marco de Canaveses.