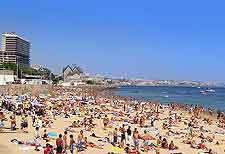 There are countless attractions surrounding the city of Porto, many of which depend upon the season. The summer months are an especially good time to explore the attractions outside of Porto, with a number of sandy beaches located close by, such as those within both Matosinhos and Gaia.

Many people visiting the town Aveiro also choose to head to the neighbouring beaches of Costa Nova and Praia da Barra, which lie just a short distance to the west and have become top surf destinations. Portugal's capital city of Lisbon is perhaps just a little too far from Porto to make it suitable for a day trip, although at 317 km / 197 miles to the south, its endless attractions are only just over three hours away and are really quite unmissable. 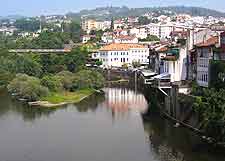 Famous for being the hometown of the Portuguese St. Valentine, the town of Amarante is easy to find and stands some 62 km / 39 miles to the east of Porto. Amarante's old heart straddles the Tâmego River and is somewhat dominated by an old church (Igreja da Sao Gonçalo) and monastery (Mosteiro de Sao Gonçalo). The river itself is lined by mature willow trees and a number of appealing attractions, while the numerous eateries and surrounding vineyards mean that the local Portuguese food and drink offers nothing short of a gastronomic delight. The true centrepiece of Amarante is its late 18th-century bridge, which is known as the Ponte de Sao Gonçalo, built from granite and boasts some of the very best views of the town centre. 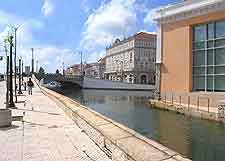 Aveiro could be described as a Portuguese version of Venice, although on a smaller scale. This appealing city boasts a series of interconnecting canals, which meet at the very mouth of the Vouga River. The many attractions of Aveiro come in the form of canals, bridges, Art Nouveau buildings and museums, all of which are only 77 km / 48 miles from Porto and can be reached in just over one hour. 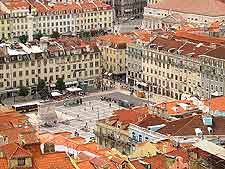 Lisbon is spread over a series of undulating hills and is without doubt that country's star attraction. Home to the one of the most notable natural harbours in the whole of Portugal, the mouth of the River Tejo, a trip to Lisbon really is what you make it, since the city encompasses so many different attractions, historical quarters and tree-lined avenues. Always popular is the vibrant district of the Bairro Alto, which enjoys a hilltop situation and is home to a wealth of restaurants and bars. As the evening approaches, why not consider watching the sunset from Lisbon's very own Moorish castle? 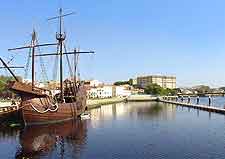 Situated a mere 35 km / 22 miles to the north of Porto, the town of Vila do Conde has become an extremely popular weekend getaway for both visitors and locals in Porto. Once an important shipbuilding port, today Vila do Conde is known for its excellent sandy beaches, which are amongst the finest in this part of northern Portugal. Other attractions in Vila do Conde include lace making and the historic town centre, overlooked by the Mosteiro de Santa Clara and its rather austere Gothic-style chapel. On the southerly side of the town's River Ave, be sure to check out the Museum of Shipbuilding (Museu da Construcao Naval), which celebrates the important shipbuilding past of Vila do Conde, with exhibits from the 13th century onwards.